With travel restrictions eased for U.S. residents seeking to visit Cuba, there’s been a corresponding surge in interest for all things Cubano, from the island’s architecture and classic cars, to its rum, cocktails and cigars. The realm of the unknown and unattainable, at least for Americans, was suddenly within reach.
At New York’s BlackTail at Pier A Harbor House (22 Battery Place, 2nd Floor), the team behind now-famous The Dead Rabbit saves you the flight and the visa though, bringing Prohibition-era Cuba to life right in lower Manhattan.

BlackTail, which opened in August 2016, may be poised to capitalize on the renewed interest in Cuban culture, but the idea for the bar predates the eased access. Partners Sean Muldoon and Jack McGarry apparently had this concept in mind prior to opening The Dead Rabbit, and bided their time waiting for the right space and opportunity to unveil it. 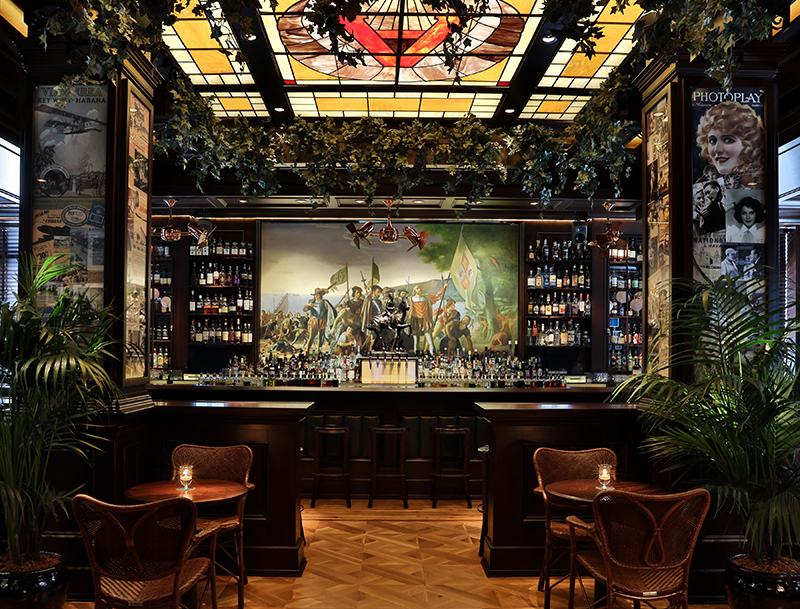 “Cuba was a direct beneficiary [of U.S. Prohibition],” said Muldoon in an official statement. “Many top U.S. bartenders relocated to the island and opened American bars catering to their thirsty visiting countrymen. As a result, Havana’s opulent bar and cocktail culture achieved peerless new heights, which we are recreating at BlackTail.”

Being that we’re right on the Hudson, what could be a better name than BlackTail?

The name BlackTail refers to seaplanes that often transported America’s thirsty elite down to Cuba, and the bar’s riverside location at the tip of Manhattan perhaps offers a vantage point for where such planes could have taken off and landed. As floor manager Laura Torres puts it, “Being that we’re right on the Hudson, what could be a better name than BlackTail?”

The whole space has been painstakingly and beautifully designed, with wood paneling, stained glass, and ceiling fans evoking what an actual American bar in Havana during Prohibition may have looked like. The walls are adorned with hundreds of black and white photos and assorted artifacts, and the bar features brass plaques with the names of American celebrities known to have partaken in the indulgences of Cuban nightlife, from Ernest Hemingway to Al Capone.

As with The Dead Rabbit, the actual menu at BlackTail is a prized piece of art. It’s a cocktail list combined with a narrative and artwork—it weaves a tale of Irish-American barman Ed Donovan, his Havana bar, and the narrator who finds him and begins indulging in Cuba’s offerings—and the hardcover 88-page book is actually available for purchase at a price of $50.

BlackTail is about people and their stories, about destinations and culture and connections

The current menu and book will remain for the remainder of the bar’s first year, and will then be replaced with a new edition. Torres says that the next menu will showcase more of a storyline focus on gangsters and the mob. A postcard is also placed inside the menu cover, which guests can fill out and have sent anywhere in the world. It’s another component that lets you know BlackTail is about people and their stories, about destinations and culture and connections.

Of course, a stylish setting and an intriguing concept are one thing, but at a bar such as BlackTail, it’s still prelude to the drinks themselves. “All of our recipes are loosely based on historical recipes,” says bartender Will Pasternak. “The menu is focused on the spirits you would have found at the time, mostly focused on rums, gin, brandies, and whiskey.”

The historical concepts though are then morphed with the best of modern mixology’s techniques and the creativity of the bar team. For instance, in what has become a signature for the bar, a simple rum and coke is reimagined without the coke. Instead, Champagne provides dryness and effervescence, and a cola syrup reduction and Fernet-Branca provide the flavor, with rum still serving as the drink’s backbone.

“They wanted to add another layer—like all the cocktails, we take a step away from what’s expected,” explains Pasternak. “It has all the flavors of a rum and coke in a very different way.”

Such creative twists don’t come easy, of course. “The R&D here is off the charts,” says Pasternak. “I’d be surprised if they did less than 30 takes on it.”

“We are celebrating American bar culture in Havana from the 1920s through the 1950s,” said McGarry in a statement. “We consulted classic cocktail books from the era to see what Americans were drinking… In particular, we are championing the highball, the unsung high priest of tall drinks.”

An insert of eight rotating seasonal cocktails is also included, and it’s there that the rest of the bar team can get more hands-on and involved with drink creation. “It’s super collaborative,” says Pasternak on the process of coming up with those seasonal drinks.

A separate full spirits list is also expansive. There are more than 100 whiskies available, along with approximately 40 rums, over a dozen gins, and a range of agave spirits and brandies.

As with every small detail, it’s all about authentically harkening back to the era they’re recreating.

BlackTail also deploys a house white rum blend, a mix of four off the shelf rums, providing a unique flavor profile for several of their cocktails. As with every small detail, it’s all about authentically harkening back to the era they’re recreating.

“We knew we wanted a white rum more in the style of what you would have found in Havana at the time,” explains Torres. With nothing available that they felt was a true fit, they opted to take matters into their own hands and concoct something new.

Guests are welcomed with a small daiquiri as they ponder the menu, and live music can be heard on several nights a week, with Cuban, jazz, and swing jazz all getting a turn in the rotation. The bar stools are designed to look like those at the famed El Floridita bar in Havana, and bartenders are dressed in Cuban-style guayabera shirts and fedoras. Every step has been taken to evoke the authentic aura that BlackTail seeks to bring back to life.

The bar is loud and lively, there’s a buzz and energy in the air with a diverse crowd partaking in the revelry. It’s as if maybe we all did just hop down for a quick jaunt in a seaplane, drawn to Cuba for the allure of its people and its parties, its cocktails and its culture. With a quick walk up a flight of stairs, the BlackTail team manages to transport you to a different time and place entirely, Cuba at its Prohibition-era heyday. 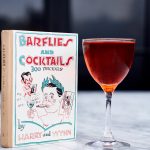 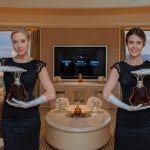