Dana Point, California, is famous for its harbor, for its surfing and whale-watching and beaches, and as the southernmost point of the storied State Route 1, including the Pacific Coast Highway. It’s an idyllic setting that captures the imaginations of would-be visitors looking for a luxury retreat in Orange County, and perhaps the leading choice to do just that is the Monarch Beach Resort, a stunning, sprawling property overlooking the sea and its own golf course. 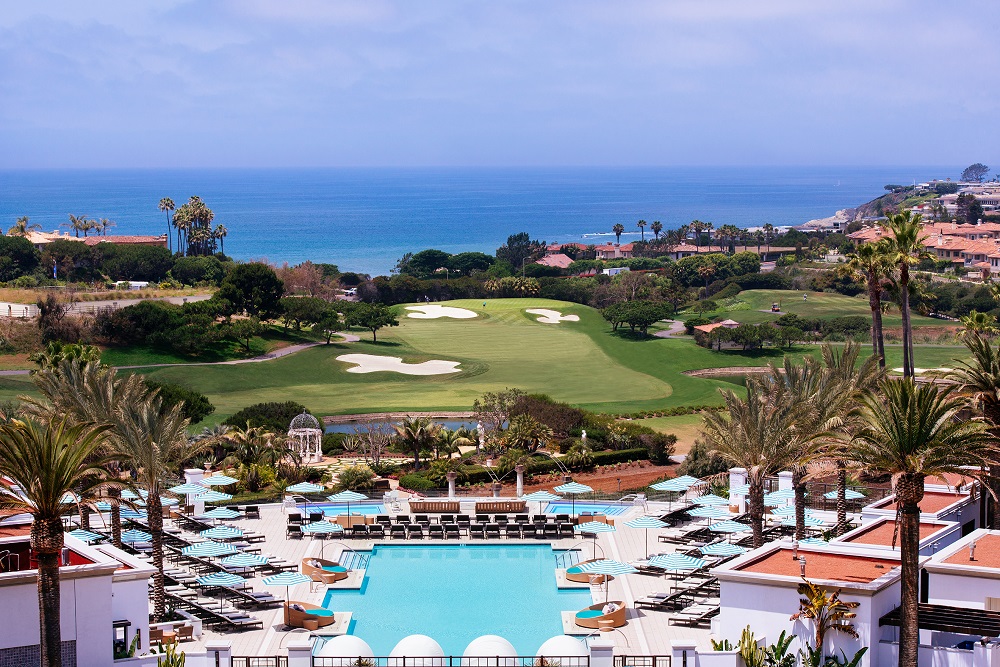 The resort has just welcomed a new addition as well, an outpost of star chef Michael Mina’s Bourbon Steak. It’s the seventh Bourbon Steak for Mina, replacing another of his restaurants which had already been on site, the award-winning Stonehill Tavern. The restaurant revamp was part of a broader renovation for the property, which first opened in 2001 as the St. Regis Monarch Beach and has since been rechristened as the Monarch Beach Resort in 2016.

With Bourbon Steak OC now in the fold, along with other new add-ons such as the Miraval Life in Balance Spa, the Monarch stands out even more as a destination property offering something for every type of traveler or vacationer. From world-class dining with a wine and spirits collection to match, and the aforementioned 18-hole, 6,600-yard Monarch Beach Golf Links, to that highly touted spa, a loaded lineup of fitness classes and activities, a private beach club, half a dozen dining options, and on down the line, Monarch will provide even the most reluctant of travelers a grand and unique experience. 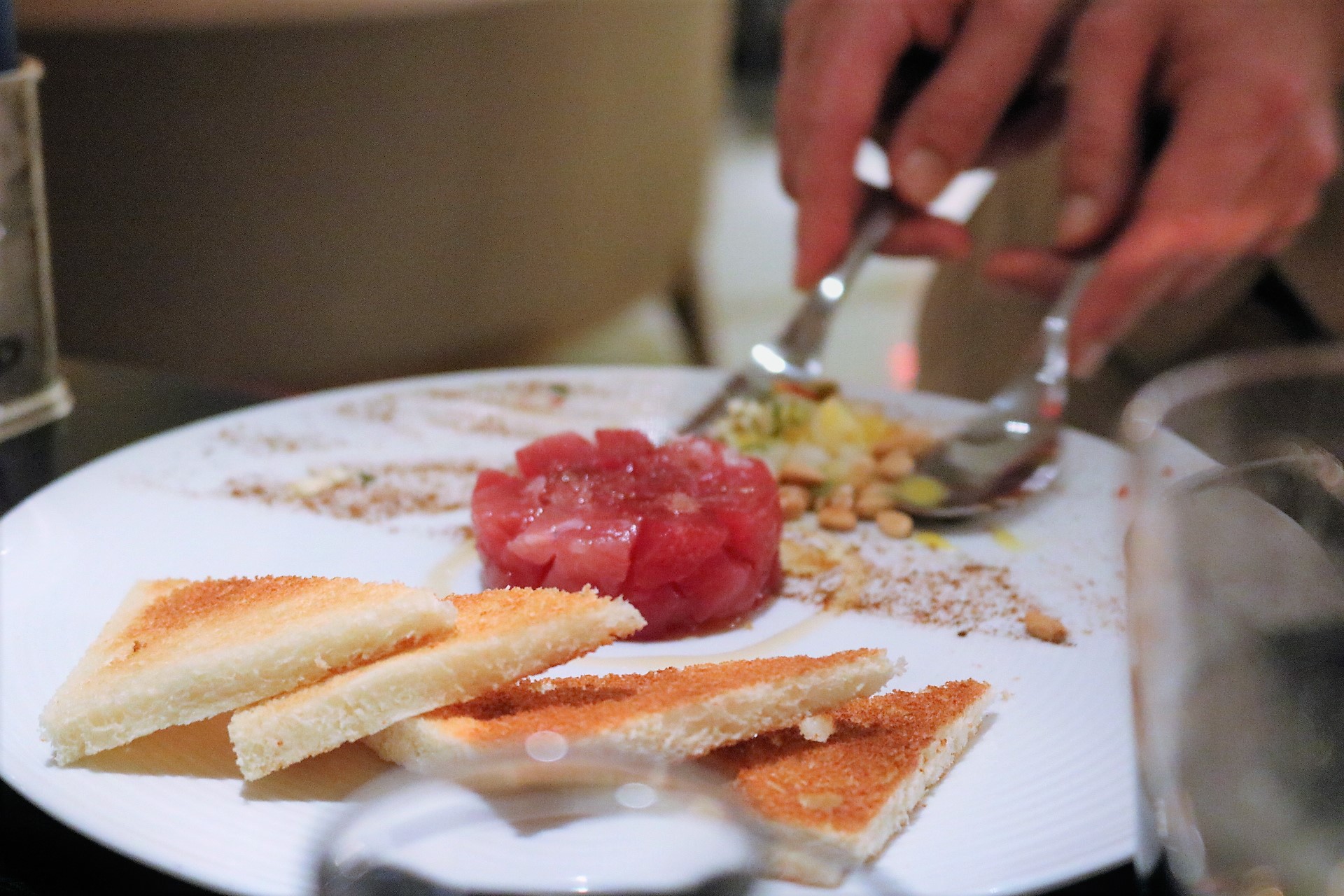 The pristine outdoor lounge area showcases several large pools, as well as infinity-style hot tubs tailor-made to soak up the orange- and pink-hued coastal sunsets offered up on a nightly basis. The dedicated and cheery attendants at the pool are ready to cater to your every whim or query, hustling to arrange your towels, drag over an extra umbrella, or deliver your special request for food or drink. It’s the type of setting where you can simply relax and let the stresses of your everyday life melt away, surrounded by a mix of near-unanimously attractive guests who may draw your gaze as even superior eye candy than the captivating crashing waves below. 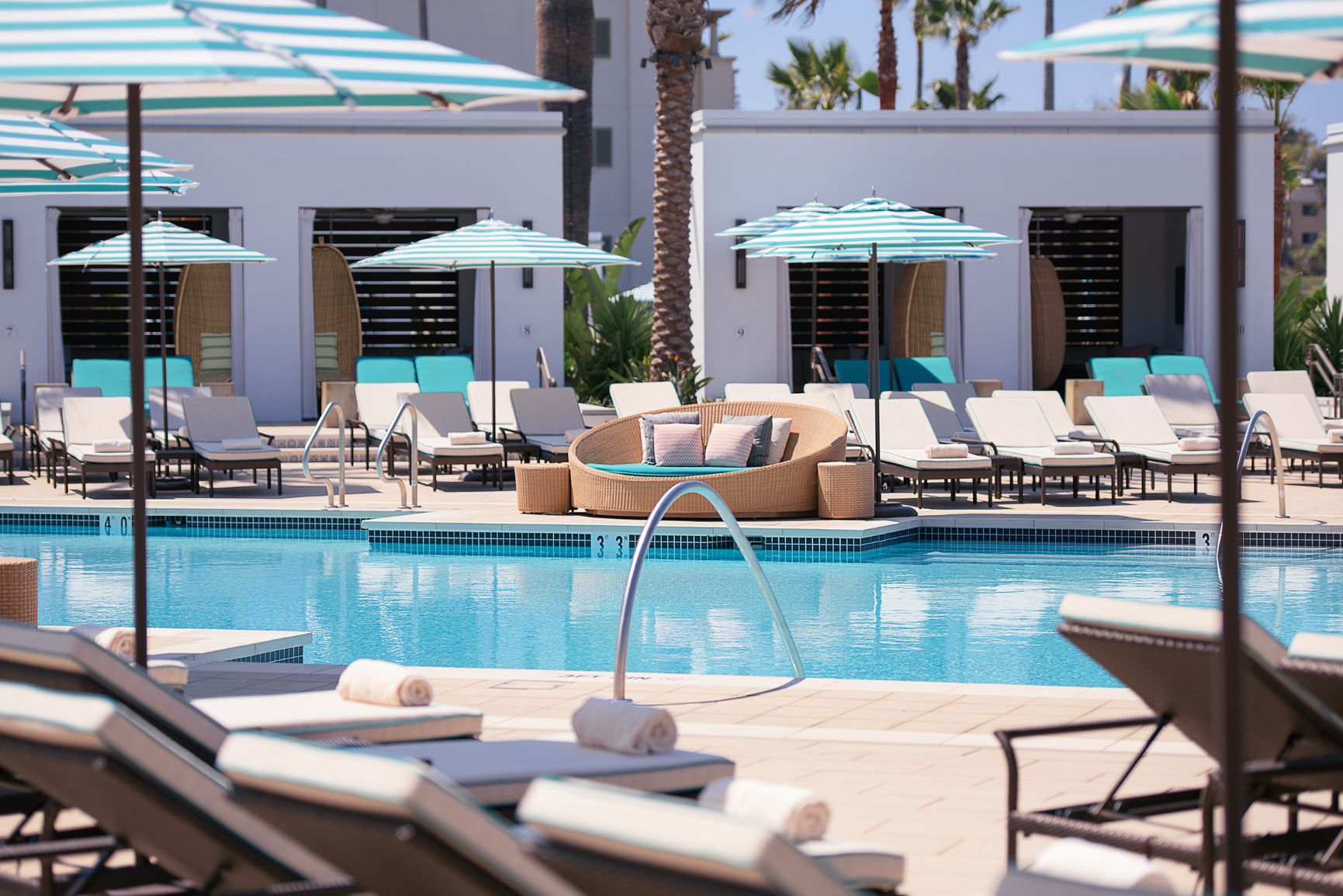 Of course, you could always turn things into a bit more of a party when you’re geared toward Sunday Fundays as opposed to restful poolside naps. Consider the rentable private cabanas lining the pool, and a menu served up from the Sombra restaurant and bar offering bottle service such as its Clicquot in the Sun package, with three bottles of bubbly and special stemware delivered to your group.

Bourbon Steak OC has only just opened this summer but is already drawing rave reviews. The restaurant’s signature dry aged cuts of beef, selections of Wagyu, and large-format entrees are joined on a menu which spins in the Californian direction, highlighted by seasonal produce and a bounty from the Pacific Ocean.

Standout dishes include favorites such as the Caviar Parfait, a multilayered stack of delectable flavors piled high atop each other, and Michael’s Ahi Tuna Tartare, incorporating sesame and pine nut, Asian pear, and Scotch bonnet peppers all folded in with the tuna by your waiter. It’s hard to go wrong with addictive sides such as black truffle mac and cheese, crispy Brussels sprouts with honey and lime, or grilled broccolini served with Calabrian chili.

The wine list is a hefty 37-page tome, so don’t be shy about asking for assistance. Lead sommelier Michelle Morin will help you find a bottle to match any particular taste or preference. When in doubt, a glass of one of the Michael Mina labels of sparkling, including Chartogne-Taillet Champagne or Iron Horse Brut from the Russian River Valley, is a safe choice that should help spur you on to further decisions.

The showstopper of an evening at Bourbon Steak may come in the form of your drink selection. Consider the Bourbon Steak Martini Cart, wheeled tableside for guests and allowing you to customize your martini to any type of specification.

Choose between Ketel One Vodka or Nolet’s Silver Gin—the Nolet’s distillery is located in the traditional home of Genever, Schiedam, in the Netherlands, but the Nolet family calls Orange County home, and its North American headquarters are located here as well—and a lineup of garnishes and flavors. Go classic or try a floral house twist on the martini. Go dirty with extra olives, keep it bright with a lemon twist, choose from a selection of different bitters, and get it stirred up with the bar’s own blend of French Vermouths. The choice is fully yours with the Martini Cart, so feel free to have some fun with it.

This flair for tableside drinks is a common theme at Bourbon Steak outposts. Consider Bourbon Steak DC, which offers a rotating collection of tableside cocktails currently including the Fireside Chat, made with High West Campfire, English breakfast tea, and walnut bitters, presented to your table in a mini Whiskey barrel filled with smoke and rigged to open like a treasure chest.

The other tableside drinks at the DC locale include The Highlander, named for local Virginia Highland Whisky mixed with Calvados and a cast of Vermouths and Amari, including Lillet Blanc, Dolin Rouge, Averna, and Cardamaro. The Dry Dock features Bourbon Steak’s private cask of Sagamore Spirit Rye, mixed with Port Charlotte Scotch, Benedictine, Dolin Rouge, cream Sherry, and Angostura. For a more refreshing twist on tableside service, a cooler filled with three flavors of Boozy Freeze Pops circulates around the outdoor patio during the dog days of a District summer.

Back to the West Coast, Bourbon Steak OC does more than elevate its cocktail service with tableside presentations, also doing so for many of the signature dishes from the kitchen. From one course to the next, dishes don’t just merely arrive, but, rather, are announced with theatrical execution.

A flavorful broth is poured over a loaded cast-iron pan brimming with an assortment of shellfish, throwing a cloud of aromatic steam into the air. Choose between lemongrass tea, charred lemon, or red miso butter sauces, or opt instead for cold sauces such as Gin-spiked cocktail sauce, mignonette, or green goddess. A choice cut of ridiculously tender steak comes presented hidden in a thick cloud of opaque herbal smoke under a glass dome. After the smoky reveal, the meat is carefully carved tableside.

The best meals aren’t just about the quality of the food being enjoyed, not merely a reflection of flavor profiles. Rather, they’re experiential, where small and unexpected bits of gamesmanship elevate the whole, quality service that gets remembered nearly above all else, and hours fly by amidst good company. Expect all of that and more at Bourbon Steak OC, and an entire trip’s worth of such luxurious memories at the Monarch Beach Resort. 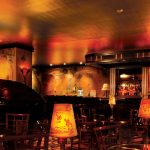