Search
Menu
Follow us
Search
The Last Drop 50 YO

Towards the end of their careers, three industry pros came together to found The Last Drop, a brand that does not distil its own drink but instead finds long-lost gems that are ready to be brought to the marketplace. One of their latest releases, the sixth in their collection, is another hidden treasure from the past.

Their 50-Year-Old “Double-Matured” Blended Scotch Whisky has had decades to develop its unique and robust taste. Most of the original blend of over 50 malt varieties, after initial aging, was bottled for normal sale in 1995 as a premium blend destined for the Asian market. But the rest went into seven Spanish Hogshead casks that had previously aged Oloroso Sherry. For 20 additional years, this portion of the original blend stayed in its Scottish Lowlands home, until the second maturation was complete and it was ready to be made available.

“You’d expect, after half a century in wood, that this would be a quiet dram, just enjoying its final years with its feet up and arms behind its head.  Instead, we have a fairly aggressive blend determined to drive the abundant fruitiness it still possesses to the very hilt,” wrote Jim Murray in his Whisky Bible 2016. “It is backed up all the way by a surprising degree of warming, busy spice.  There is a hell of a lot of life in this beautiful ol’ dog.”

Murray, the respected Scottish writer whose specialty is Scotch Whisky, awarded the 50-Year-Old “Double-Matured” 97 points out of 100 — putting it in the “superstar Whisky” category — and named it the Scotch Blend of the Year for 2016. Only 898 bottles were produced, each wax-dipped by hand and coming in a forest-green leather case that includes an additional 50-milliliter miniature, a signed certificate of bottling, and a bound book for tasting notes. The guideline retail price is $4,500.

The slow, double maturation process blends not only a variety of Scotches but also of woods. From the Bourbon, wood comes stone fruit and honey, while a spiciness is passed on from the Sherry casks. The Whiskey is unfiltered and unrefined when bottled, then sealed with a waxed, driven cork. The slow maturation has resulted in a cask strength of 51.8%.

“Here’s the thing: you expect those gathering oak tones to turn a tad tired and worn. But they never do,” Murray explains. “Instead, the spices buzz and a little manuka and heather honey face the oak to inject just that small degree of sweetness required for a happy ending.”

“Before There is No More”

Andrew Rankin, the consultant master blender at The Last Drop — also known as “the nose” — adds this observation about this gorgeous old blend: “On the palate, the Whiskey is rich and smooth with generous dark raisin, star anise, and baked plums. The finish is luscious and lingering; red grape and blackcurrant with a subtle overtone of licorice.”

The Last Drop exists to bring liquor like this to the market. Founded in 2008 by James Espey, Tom Jago, and Peter Fleck — all deeply experienced hands in the trade, with years of experience and numerous successful brands on their resumes — its institutional mission is to find small-batch, neglected, vintage distillations and share them. These old drinks are brought forward with the highest standards of modern bottling and presentation.

The slogan of the company is “Before There is No More.” The core idea is — based on their collective years in the business — Espey, Jago, and Fleck knew small batches of single malts and leftover blends were lying about in the nooks and crannies of the Scottish distilling infrastructure. Using their contacts, they started tracking these down, finding and sampling forgotten leftovers that otherwise might never see the light of day again. Their 50-Year-Old “Double-Matured” Blended is a fine addition to their quest. 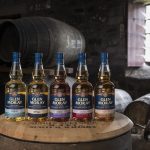