Some bars have been around seemingly forever, physical and cultural fixtures in their neighborhoods and even cities. But some bars are new inventions, visions realized by entrepreneurs who wanted to start a tradition, not be part of one. The Cure is just such a bar, one that rose in the aftermath of the devastation of Hurricane Katrina. It then not only took off as a fine drinking establishment, but anchored the renaissance of the Freret Street locale where it’s located. 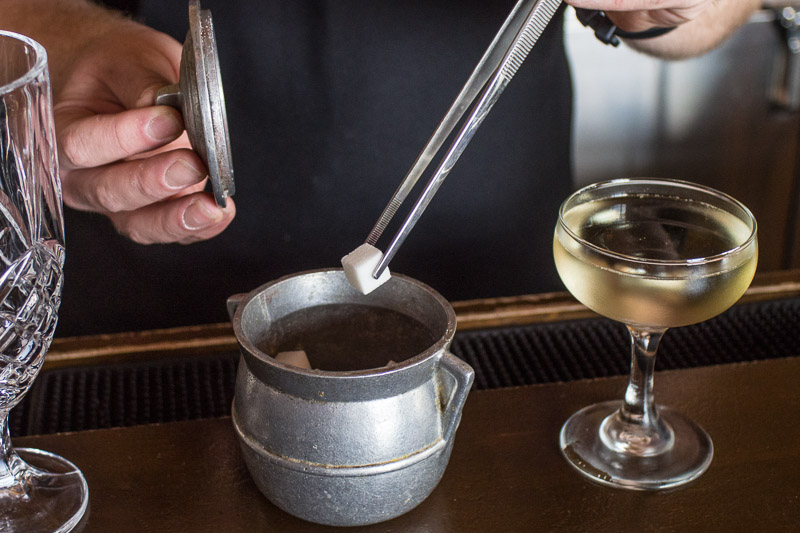 Founded in 2009 by Nick Detrich, Neal Bodenheimer, and Kirk Estopinal, the Cure — with its exposed brick walls inside what was once a firehouse and sleek and modern backlit bar that highlights their ample liquor selection — quickly became a serious, go-to bar known for providing an elegant, yet trendy drinking experience. A sophisticated place for the younger set, not stuffy, but not too casual either.

The seriousness of the endeavor was obvious from the start, with a couple of the bartenders publishing a drink-making manifesto entitled Rogue Cocktails, which claimed to be “… a cocktail guide for the bartender who wants to introduce their customers to a libation that is challenging, complex, and, most importantly, a new experience.”

Like so much in contemporary New Orleans, the imprint of Hurricane Katrina looms large in the history of the Cure. Bodenheimer is a New Orleans native who was working in exclusive bars in New York City in the aftermath of Katrina, but felt the siren song of his hometown. With Detrich and Estopinal the bar was opened in what was then a downtrodden area, with the goal of bringing a level of cocktail mixology and service that was as fine as any in the world, but with that gentle laissez les bon temps rouler swagger that New Orleans is famous for: Let the good times roll indeed.

“People said we were a little crazy to open here but it was the only place we could afford,” Bodenheimer is quoted in a Guardian article about New Orleans getting its groove back after Katrina.

Like the characters chronicled in HBO’s Treme, the partners who came together to open the Cure were crawling through the wreckage, both cultural and physical, left in Katrina’s wake. Their hope was of rebuilding their city not as a museum piece, but as a vibrant new city that would incorporate its past but also embrace the change that had been forced upon it. The Cure is widely accepted in New Orleans as having been a trailblazer in the cocktail scene. It has proved a training ground for bartenders who have ventured out and opened their own places, adding to the vitality of the city’s scene.

The Cure is less famous for a signature drink than for their serious and varied list of creative concoctions as a whole, with bartenders who are encouraged to experiment, sometimes riffing like a good jazz musician.

Drinks like the Waltz #2 (a champagne cocktail hinting of honey, pear, and cardamom), the White Witch (Cocchi Americano, Barsol Primero Pisco, Strega, and Witch Bitters), the Half Baked (a sour featuring Oregon Apple brandy, Jamaican rum, and hints of cranberry and spice), and the Monsters in the Mist (a rye-based drink with hints of grapefruit and spices) give a sampling of the Cure’s varied and creative drink menu.

Their Freret Street­ location is in Uptown New Orleans, near the campuses of Tulane and Loyola (though the Cure is in no way a college bar). Their clientele is upscale young professionals and anyone who desires a creative, challenging drinking experience.