PARIS – Classic French cuisine has inspired generations of chefs from around the world who devote their lives to mastering complex recipes created by craftsmen like Auguste Escoffier, Paul Bocuse, and Pierre Troisgros.

But haute French cooking is not frozen in time. Its unique cuisine continues to evolve and flourish thanks to innovative French chefs like Alain Passard, Daniel Boulud, and Anne-Sophie Pic.

But who will carry the torch for the next generation? Which young chefs are pushing the boundaries of French cuisine? For the last half-century, an elite, annual competition created by a legendary Champagne house has honored the world’s top, young chefs for their culinary skills. And this year’s winner is no exception—an up-and-coming chef from a legendary French restaurant in a suburb of the Swiss city of Lausanne.

Who will carry the torch for the next generation?

“Winning one of the three most significant international awards (Meilleur Ouvrier de France, Bocuse d’Or, and Taittinger), is for me a huge pride,” Meyer said recently. “It means a lot to me to have my name engraved among the best chefs in the world. My name belongs today to the story of this prize. Working at Hotel de Ville in Crissier means transmitting ‘savoir-faire’ and ensuring a continuity. With my colleague Jérémy Desbraux, who won this same award in 2015, we have contributed to the excellence we serve every day at this legendary place.”

Restaurant de l’Hôtel de Ville de Crissier’s head chef, Franck Giovannini, also praised Meyer for his victory. “I am very proud of Tom,” said Giovannini, who was named the ‘Chef of the Year’ this year by Gault et Millau. “He has won an important and significant international award. My aim is to transmit my know-how and passion as well as my immense pleasure in participating at culinary contests to my team in the kitchen and at the pastry station. I believe it is here where they can develop and prove themselves. They learn to go beyond their capacities and to always give their very best. Until today, in total ten people from the restaurant Hôtel de Ville in Crissier have participated at this contest and two have come back with the first place. After my right hand—‘mon second,’ Jérémy Desbraux, it is Tom Meyer who has brought back the trophy to our establishment.”

Brigitte Violier, managing director of Hôtel de Ville in Crissier, also praised Meyer for his historic achievement, which she said she believes will result in a more refined dining experience at the restaurant. “Ensuring the continuity, the motivation, and the effectiveness of our teams and talents is the guarantee of the best transmission of our know-how to our clients,” Violier said. “For the past 1½ years, we have built a structure that allows our talents to develop themselves and to excel in what they do with all the tools necessary. We encourage them to participate at contests in order to show their skills, but also to challenge themselves and understand the excellence we require here at Hôtel de Ville in Crissier day after day. As successor of this Maison, my role is to stimulate the dynamic, young, and modern team of talents to guarantee that the tradition, history, excellence, as well as the “Art de Vivre” concept, we offer to our clients endures. Our objective: to trigger emotions through experiences in its entirety!”

Taittinger Champagne created the Prix Culinaire in 1967, a time when chefs “were still not famous, no stars like today,” said Taittinger brand ambassador Jean Pierre Redont. He added that the international cooking competition was created partly in honor of Pierre Taittinger, who passed away in 1965.

Champagne is a good match with food, too

“The idea was to say thank you to the chefs and to show the new generation,” Redont said. “And Champagne is a good match with food, too. It’s important to do it because our best souvenirs are always around a table with friends or your wife or husband and better with good food and wine.”

The list of previous winners includes an illustrious array of some of the most legendary French chefs. Michel Comby won the inaugural competition in 1967. A 27-year-old chef at the time working at the legendary Parisian restaurant Lucas Carton, Comby won with poached turbot that was cooked very gently, partly because the oven he was using for the competition was not working properly, he recalled in an interview in The Taittinger, The Chef’s Prize, a book published in 2016 to commemorate the 50th anniversary of the founding of the international cooking competition. The book also contains Comby’s winning 1967 recipe for turbot soufflé.

Comby won, partly because the oven he was using for the competition was not working properly

Starting in 1968, Comby served as a judge for the Taittinger prize for the next 48 years. Some of the other legendary winners Comby helped crown at the annual competition include Joël Robuchon in 1970, Michel Roth of Le Ritz Paris fame in 1985, and Régis Marcon in 1989.

Roth recalls the crazy day he won the Taittinger in 1985 in the book published last year to commemorate the competition. On his way to the contest, the fourth sous chef at The Ritz was arrested by police after they found the knives he brought for the competition in his case. Roth was eventually released in time to compete in the Taittinger. The main dish competitors had to cook? A whole salmon. Roth chose to prepare his salmon with Taittinger Champagne, cauliflower, and grilled oysters. The dish went on to become a popular staple at The Ritz.

“The Taittinger is more than a springboard. It’s a mark of recognition,” Roth said in an interview published in the book. “It brings you fame and allows you to assert yourself in the profession. It’s also a human endeavor, the only competition where you feel a family spirit.”

The familial spirit was alive and well at the 51st annual competition in November in Paris. Chefs waiting to find out who won the top prize chatted amicably with each other in a large ballroom in The Peninsula Hotel steps from the Arc de Triomphe in Paris. Past winners talked to each other and journalists from around the world. And at the center of it all was the master of ceremonies, Pierre-Emmanuel Taittinger, CEO of Taittinger Champagne. His children, including Vitalie Taittinger, were also actively involved in the gala celebration to honor Meyer and the other finalists for the Taittinger – Prix Culinaire International.

Because when you win the Taittinger, you don’t just win a competition. You become part of a family for life, a family comprised of world-renowned chefs and producers of some of the finest Champagnes in the world.

“The ‘Taittinger is a love affair,” Pierre-Emmanuel Taittinger wrote in the preface for The Taittinger, The Chef’s Prize. 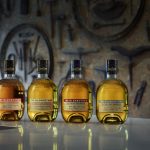 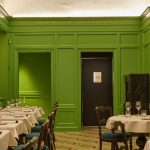