The finest things in life tend to be even finer when enjoyed in tandem. A perfectly cooked, choice cut of dry-aged steak washed down with a glass of wine from an exceptional vintage comes to mind. As does a good drink in an environment with an awe-inspiring view, or a cigar with a glass of rosé. Wait … what?

Certified tobacconist Mason Foster has unveiled a new Sip & Smoke lineup of cigar and drink pairings that are far from the mundane.

At Bourbon Steak, located in the Four Seasons Hotel Washington, DC, certified tobacconist Mason Foster has unveiled a new Sip & Smoke lineup of cigar and drink pairings that are far from the mundane. As it turns out, sitting by the fireside with a cigar in hand and a glass of your favorite whiskey or a snifter of cognac is far from the only way to indulge your cigar-smoking pastime. In fact, atypical libations paired with a fine cigar may provide a more satisfying result.

“Having a cigar and a whiskey is the experience people often expect,” says Foster. “They know that that is part of having a ‘good time,’ and there’s nothing wrong with that.” However, the intensity of a whiskey often clashes with the intensity of a cigar, with oak and spice joining forces in a palate tug of war against smoke and heat.

“And that’s very well why I suggest against whiskey,” continues Foster. “You’re dealing with something hot and powerful with a whiskey … and then you’re taking a lit flame and putting it in your mouth! Whether you’re starting with one or the other, you’re dealing with a lot of powerful forces. Ideally, you want something that will serve as an accent.”

As with the more familiar pairing of food and wine, balance is the key, not a fight for power and supremacy. “You want something that comes together, but is also able to go on its own, and that way you can enjoy the cigar for what it is, enjoy the cigar with what you’re drinking with it, and then the drink for what it is,” says Foster.

One oft-overlooked component of a perfect pairing is that it’s almost akin to a puzzle with different pieces fitting together, or perhaps even more accurately, an equation, with the ideal outcome being measured as the midway point on the pH scale.

“The most important thing when it comes to pairing anything, you want flavor profiles in each respective item that overlap”

“The pH scale is from 0 to 14,” explains Foster. “From 0 to 7 is acidic, and from 7 to 14 is alkaline. In the center, it’s neutral pH, and this is where you’d ideally like to interpret any flavor profile on your palate. Now a cigar itself is alkaline, so if you have your cigar here [Foster points midway to the alkaline side of a quick drawing he just worked up at the table] and your drink is there [midway on the acidic side] that brings you to the center.” 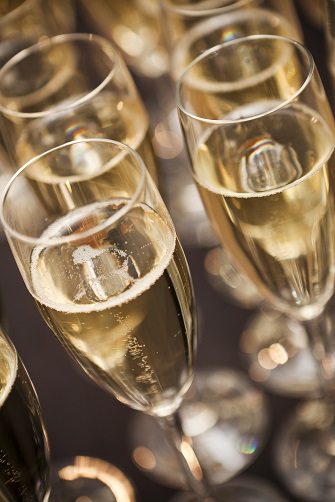 What is his go-to pairing then, particularly for those new to the world of cigars? A mild cigar with a glass of bubbles.

“The most important thing when it comes to pairing anything, you want flavor profiles in each respective item that overlap,” explains Foster. “My classic pairing that I will always go to first: a mild, creamy cigar, traditionally a Davidoff, with champagne. The mild Davidoff has that cream, a little bit of brioche, toast, and then you have the champagne which has all of those flavors except that nuttiness.”

The importance of pH neutrality is also why Foster is known to employ a favorite palate-freshening trick: popping a Skittle now and again. “So a classic thing that I do is with Skittles,” he says. “They’re a little sweet. A little acidic. I pop one every 10 or 15 minutes if I feel my palate is getting a little overwhelmed from the same flavor profile over and over.”

“Ideally, a cigar is going to change as you’re going through it,” he continues. “It has a different blend of tobacco in the beginning, middle, and end. Through that, you want to experience the cigar through those different blends as it was intended by the producer. So if you’re not refreshing your palate throughout, you’re not really experiencing it the right way.”

On the Sip & Smoke menu, the champagne and Davidoff duo is seen specifically in the form of a Dom Perignon 2006 paired with a Davidoff Series 702 Aniversario No. 3. Meanwhile, the toughest sell on the list for the steadfast cigar-and-cognac enthusiast may be the aforementioned rosé pairing, such as an Avo Classic No. 9 paired with a Ruinart Brut Rosé from Champagne.

“It will be [the toughest sell], 100 percent of the time,” says Foster, but he relishes that challenge of a creating a new convert. “That’s the whole point of what we are doing here.”

Two cocktail pairings are also offered. The first is a Kifu cocktail — made with Ketel One Vodka, Cointreau, lemon, ginger, and basil — alongside an EP Carrillo Seleccion Oscuro Piramide Real. “This is all about pH level, it’s bright, crisp, and refreshing,” says Foster.

But wait—that’s a whiskey cocktail! What gives, Mason?

“For everything that I will say against whiskey or Scotch and a cigar, this one, because it is so diverse, it has that sweetness, it has a little bit of the coffee and chocolate, and then you’re getting the heat from the rye, a little spiciness, the Lagavulin brings the smoke, because it’s a little bit of each one of those it’s able to be accented better as opposed to a pure bourbon or rye or Scotch with a cigar,” he explains.

“The name ‘Fifth Season’ nods to our location at the Four Seasons and the notion of extending beyond the standard,” says head bartender Torrence Swain, who created the drink. “This idea of continuing after something also comes into play as this drink is especially enjoyable as an after-dinner quaff. The melody of its ingredients is best served at room temperature without the introduction of water or ice — both of which would dilute and dampen its flavors. Room temperature cocktails are harder to find on most cocktail menus, so they are intriguing to guests who are curious about trying something new.”

As for the cigar, it goes with, Foster calls it a “highlight amongst highlights” from their humidor. “Very few of [the Montecristos] came into town,” he says. “We were able to purchase 90 from W. Curtis Draper, their entire stock, so we would be one of the only few people able to provide it. And having smoked it, I could not wait to smoke it again. And when I smoked it again, I still wanted to come back to it.”

For those who do insist on neat pour of a brown spirit to go hand-in-hand with a cigar, Foster still has wisdom to share. “Cognac and rum have that sweetness, the body, and because of that, they aren’t competing as much with the heat, they work much better,” says Foster. “Even something such as a Hennessy VSOP will taste miles better than say a Bulleit Bourbon. Cognac over whiskey, and rum over cognac.”

Further, just as some diners may start with their entree and then pick their wine, while others do the opposite, the same holds true for cigars and drink pairings, too. It works either way.

“When people sit down at a restaurant, they have two tracks: you can either choose the wine first, or you could pair the wine to the food, and it’s the same situation,” says Foster. “If you’re open to experiencing anything from a milder to a more full-bodied cigar and your palate is open to the full spectrum, and you’re more preferable to your drink, then that’s more important to you. Hallelujah! More power to you. And that’s a whole conversation.”

On a recent visit, that’s the direction I opted to move towards after seeing Pernod absinthe listed as a pairing option. It was matched with a Partagas Ramon Y Ramon Robusto, tabbed as a medium-bodied cigar offering wood and almonds, leading to an herbal finish.

“Partagas is one of the original icons of Cuba,” says Foster. “The Partagas Serie D No. 4 is the go-to Cuban cigar for most people around the world. This is their Dominican version.”

The duo performed in true synchronicity with each other. The absinthe offering its enticing herbaceous profile and viscous mouthfeel, serving almost as a guide for the cigar, introducing the smoke and easing it onto the palate.

Not only was that pairing sensational, but also perhaps what was most illuminating about how well the two were balanced was trying a different drink to go with the cigar. In this case, grabbing a sip from a glass of Sancerre at the table. The palate was quickly thrown off kilter, with the new beverage far removed from the seamless interplay between the absinthe and the Partagas.

Clearly, it takes the right touch to create a match made in heaven.

Clearly, it takes the right touch to create a match made in heaven. Consider me a convert to a new type of cigar and drink pairing.

Bourbon Steak currently has seven cigar and drink pairings listed on their Sip & Smoke menu, priced together from $18 to $55. Guests are also encouraged to bring their own cigars if they prefer or to request a different pairing based around any specific preference. If anybody in town is up to the task, it will be Foster who gets it right for you. 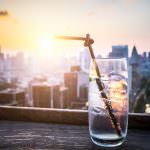