This seems especially true in France. So many top French chefs have opened many other satellite restaurants bearing their name across France, and in the United States as well. –Then there’s Alain Passard.– The world-renowned, 60-year-old French chef owns one restaurant: L’Arpege. Passard opened L’Arpege in 1986 in Paris’s 7th arrondissement in the same space that once housed Archestrate, the restaurant run by Alain Senderens, one of Passard’s key mentors. L’Arpege received its first Michelin star in 1987. A year later, L’Arpege received its second Michelin star. The third Michelin star came in 1996. After that, Passard could have easily opened another restaurant in Monte Carlo or London, New York or Las Vegas. But that wasn’t where Passard felt his destiny lay.

To understand Passard, you need to understand music. An avid saxophonist, Passard named his restaurant after the musical term “arpeggio.” An arpeggio is a broken chord. Or more precisely, a musician often plays the notes individually in a cord and improvises in between. Jazz musicians do this all the time. Think of gypsy guitarist Django Reinhardt, saxophonist Charlie Parker or pianist Thelonious Monk, the notes rising and falling in between each other in beautiful, rhythmic harmony. Passard’s passion for jazz music and improvisation truly explains his approach to cooking, and to his life in general – there’s something of the daredevil, the pioneer and artistic explorer in him, which permeates his incredible approach in the kitchen. It’s also probably why he regularly jumps out of airplanes. Passard has skydived more than 1,000 times, according to an interview he did last year with Bon Appétit magazine. “I love being in contact with the air,” he said in the Bon Appétit interview. “Everything feels so fluid up there.” And, as I’m sure anyone who has worked in a 3-star kitchen will tell you, skydiving is nowhere near as frightening as plating up perfection for the world’s top restaurant critics.

Passard’s fearlessness and willingness to experiment has made him a legend in the kitchen. In the late 1990s, Passard channeled his energies towards creating innovative dishes primarily using different meats, including ducks and chickens. After once watching a ballet, Passard famously sewed half a chicken and half a duck together to create a completely unique dish and to “make them dance together,” as he explained in a Netflix documentary about him as part of Chef’s Table, France. Passard could have easily continued making such creative dishes with various meats for decades. Or even probably just made the same handful of dishes that made him famous – most people probably wouldn’t have cared and would have continued to flock to his Paris restaurant anyway.

Always ready to fly in the face of expectation, Passard did something almost unheard of for a Michelin three-star chef in France.

He stopped cooking meat. “Working with meat became very painful,” Passard said in Chef’s Table, France. “I was in a period of rupture, I needed time to think,” Passard added. Passard took some time off from cooking at L’Arpege. He thought. And the idea he came up with was to devote the same passion and attention to detail that he had devoted to meat, and to direct it towards vegetables instead. “A beet can be cooked in a crust of salt like meat,” he said in the documentary. “A stalk of celery can be smoked.  An onion can be flambéed. A carrot can be grilled.” So in 2001, Passard began cooking exclusively with vegetables. And not just any vegetables. He soon started cooking exclusively with vegetables from his own gardens. In 2002, Passard’s first vegetable garden was created in Fillé sur Sarthe southwest of Paris. In 2008, the second vegetable garden was set up in Buis-sur-Damville west of Paris. Two different gardens with two different types of soils. And if that wasn’t radical enough, Passard basically did away with recipes. Instead, the freshest fruits and vegetables from his farms were simply delivered to L’Arpege each morning. Then each day, Passard would do what his jazz idols did best – improvise. So on a daily basis, Passard created innovative dishes based simply on whatever was fresh from his gardens. This radical approach might seem routine now to many farm-to-table aficionados. But Passard’s simple devotion to serving the freshest fruits and vegetables in innovative ways helped cement his legacy as a culinary pioneer.[/vc_column_text][/vc_column_inner][vc_column_inner width=”1/4″][/vc_column_inner][/vc_row_inner][/vc_column][/vc_row][vc_row full_width=”stretch_row_content_no_spaces” css_animation=”fadeIn”][vc_column][vc_gallery interval=”5″ images=”11159,11160,11161″ img_size=”full” onclick=”” title=”Restaurant L’Arpege”][/vc_column][/vc_row][vc_row full_width=”stretch_row_content”][vc_column][vc_row_inner][vc_column_inner width=”1/4″][/vc_column_inner][vc_column_inner width=”1/2″][vc_column_text]

Some meat has since returned to the menu at L’Arpege. But it’s Passard’s passion for vegetables and his willingness to experiment every day that put L’Arpege on the world restaurant map, and continues to keep it there. Along with maintaining three Michelin stars every year since 1996, L’Arpege has consistently been listed on “The World’s Best 50 Restaurants” list. And earlier this year, L’Arpege was named the best restaurant in Europe for the second year in a row, on a list compiled by Opinionated About Dining.

A Journey of Flavor, Delivered By Expert Hands

People dining at L’Arpege have a choice of four menus. They can dine A La Carte, have the vegetable tasting menu (320 Euros per person), the dinner tasting menu (390 Euros) or the lunch tasting menu (145 Euros).

You simply put your trust in Passard and allow him to astound you from one course to the next.

The vegetable tasting menu and dinner tasting menu explain in detail all the courses prepared by Passard and his talented team. The lunch tasting menu is a complete surprise. You simply put your trust in Passard and allow him to astound you from one course to the next. The Monday afternoon in late May my wife and I ate at L’Arpege, we decided to try the lunch tasting menu. Maybe it was because I never knew what was coming next, but there was a real sense of drama and excitement to every single course. I should add that throughout our meal, we were brought fresh bread and some of the best butter I have ever tasted from Normandy, which had been lightly seasoned with sea salt. And as expected, L’Arpege has an extensive wine list. We had a beautiful, earthy white wine from the Saint Aubin region in Burgundy that went perfectly with our meal.

The first course on the lunch tasting menu consisted simply of an egg lightly cooked and with the top of shell removed. Like many courses served that day, the first one was simple, elegant and tasted absolutely divine. The second course featured consomme soup scattered with mint and bolstered with delicious dumplings. The aroma and the flavors in the soup were understated, earthy, and yet refined. The third part of this increasingly fascinating menu featured tabouli, shallots and other finely-chopped, incredibly fresh vegetables. The fourth course absolutely blew me away with its depth of flavor and elegant simplicity – turnip Carpaccio with radish. Sliced razor thin and topped with geranium flowers and a dash of sea salt, the slices of these glorious root vegetables were silky smooth and lighter than air. The fifth offered something different; a light, delicate soup consisting of asparagus and heavy cream. Cabbage, onion, garlic, and geraniums were the main ingredients in the sixth course, which was topped with a white foam. This course looked like soup at first, but could be eaten with a fork. The seventh course was much more simple – terrine of pork with dill. Here again, everything tasted incredibly fresh and understated, and the combination of flavor, aroma, texture and evident skill in execution was outstanding. The penultimate part of the main act of this tasting menu was another stunning creation – thinly sliced potatoes, cream, anchovies, leek and radish sliced as thin as a contact lens, topped with a sprinkling of trout fish roe.

Living in New England, I thought I was familiar with how to prepare lobster. But the ninth course came as a complete surprise  – lightly steamed lobster claw meat, removed from the shell and topped with thinly sliced turnips and fresh honey. After the lobster course, it was time for the first of five dessert courses. The first dessert was hay ice cream served with a cookie, roasted almonds and a dash of sweet honey. The second was an array of petit fours which looked like miniature works of art, and tasted simply divine. The third dessert course was an elegant mint ice cream. This was followed by coffee cream caramels topped with sea salt. The closing movement in a symphony of sweet treats was an almond cookie, topped with thinly sliced pears and sweet shallots. A waiter then brought us our coffee with the sugar cubes housed in a small, red, wooden, lacquered box – these luxurious touches were not unnoticed and heightened every aspect of the dining experience. Sitting there sipping my coffee, I felt myself to be in a state of bliss as I thought about the 14-course lunch I had just experienced over the previous three hours. I didn’t feel bloated or exhausted. I also felt neither rushed nor ignored by the attentive waiters. I simply marveled at how amazing and fresh and simply elegant every course was, from start to finish.

Passard’s a true artist, and although the word ‘genius’ is bandied around a little too readily, he could certainly be described that way. The world’s a better place because of him and his innovative creations prepared with love at L’Arpege. 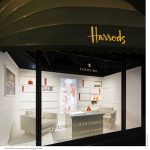