The downtown Las Vegas restaurant recently unveiled several dishes named for friends and family of former Las Vegas mob attorney and mayor Oscar B. Goodman. Their personal stories are detailed in an Oscar’s Steakhouse “Black Book,” a reference to the infamous list of people blacklisted by Las Vegas casinos, usually because of their ties to organized crime.

“I think it will be great for conversation because that’s what this place is all about,” the martini-drinking Goodman told an enthusiastic crowd as he stood beneath the restaurant’s iconic dome to unveil the new menu items on July 19. “You can hear yourself talk in Oscar’s. Every other restaurant in town you can’t hear each other talk.”

Among the friends and family listed in Goodman’s restaurant “Black Book” is his wife Carolyn, the current mayor of Las Vegas. Her dish is a Vegas classic, Carolyn’s Prime Rib.

The husband and wife made history when she succeeded him and he swore her into office in 2011. “More importantly, she has kept me on the straight and narrow over all the years, even in the face of the greatest temptation,” he wrote in the book. “I’m the luckiest guy!”

There are a dozen new and refreshed items on Oscar’s menu, including appetizers, salads, and entrées.

Named for one of the city’s founding fathers, Benny Binion, Benny B’s Roasted Bone Marrow is a new appetizer of bone marrow topped with herb butter and demi-glaze, then roasted until golden brown. Binion opened the popular gambling hall Binion’s Horseshoe in 1951. Goodman often ate with him at his table at Horseshoe, along with Judge Harry Claiborne, private eye Eddie La Rue, and Benny’s wife Teddy.

Binion, who died in 1989, was considered a tough guy, but Goodman describes him in the book as having “the heart of a cream puff.” His appetizer is served with grilled bread and a lemon, caper, shallot, and parsley salad.

More importantly, she has kept me on the straight and narrow over all the years, even in the face of the greatest temptation

Goodman considers the trophy one of his most prized gifts and hung it prominently above the door of his law office. The juicy bacon appetizer features a double-cut pork belly grilled with a homemade jalapeño honey glaze.

According to the book, Kaye would use a pay phone outside the legendary Churchill Race and Sportsbook on the Las Vegas Strip to relay his bets to gamblers all over the country. “The FBI took his picture jumping up and down trying to put coins into the telephone slot,” he wrote. Kaye went to Goodman for help when he was subpoenaed to appear before the Federal Grand Jury.

Goodman was held in contempt of court for refusing to honor a grand jury subpoena in regards to an extortion charge against Richichi. Goodman was later criticized by the FBI when, as mayor of Las Vegas, he attended Richichi’s funeral. But Goodman has no regrets. Big Chris’ Osso Bucco is served over polenta and topped with herb gremolata.

In addition to appetizers, salads, soups, sides, and entrées, Oscar’s also has a large dessert menu and a full cocktail menu, including some new handcrafted libations.

Goodman, who celebrated his birthday on July 26, has a reputation as the “Happiest Mayor in the Universe,” making his steakhouse “The Happiest Steakhouse in the Universe.” The glamorous and uniquely Vegas restaurant overlooks the lights of the Fremont Street Experience. Adding to the classic atmosphere, crooner Larry Liso performs 1950s mood music live in the lounge on Friday and Saturday nights.

“We’re so lucky to be here in Vegas,” said Goodman at the menu unveiling. “It’s the greatest city in the history of the world. There’s nothing like it and we celebrate it every single night at Oscar’s.” 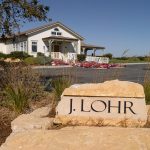 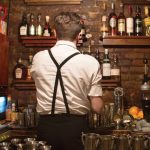