The Scottish island of Islay (pronounced E-lay) in the Inner Hebrides holds a special place in many Whisky lovers’ hearts. Even if you’re not a fan of the often-peaty Whiskies and Single Malt Scotches produced on this small island just west of the mainland and north of Northern Ireland, there’s no mistaking a Whisky from Islay. “They call it (Islay) the happy island,” Bowmore Scotch Ambassador Brenden Lee said. “There are over eight distilleries on the island.

They call Islay the happy island

Some distilleries on Islay take the peat flavors to delirious, sometimes dizzying heights like Laphroaig or Lagavulin. And then there’s Bowmore, one of the islands oldest and best-known distilleries located in the town of Bowmore. While you can definitely smell and taste the peatiness in Bowmore’s Whiskies and Single Malt Scotches, other flavors often emerge, depending on the Whisky’s age and a wide range of other factors. “Bowmore is kind of entry level for the peat,” Lee said, “whereas Laphroaig and Ardbeg really hit you in the face.”

Founded in 1779 by a local merchant named John P. Simson, Bowmore Distillery has since become world famous for its subtle, understated Whiskies and Single Malt Scotches. And while the massive Japanese beverage conglomerate, Suntory, has owned Bowmore since 1994, this picturesque, white-walled distillery perched on the southern shore of Loch Indaal has refreshingly remained relatively the same during the past two centuries and continues to produce top-notch Whiskies. 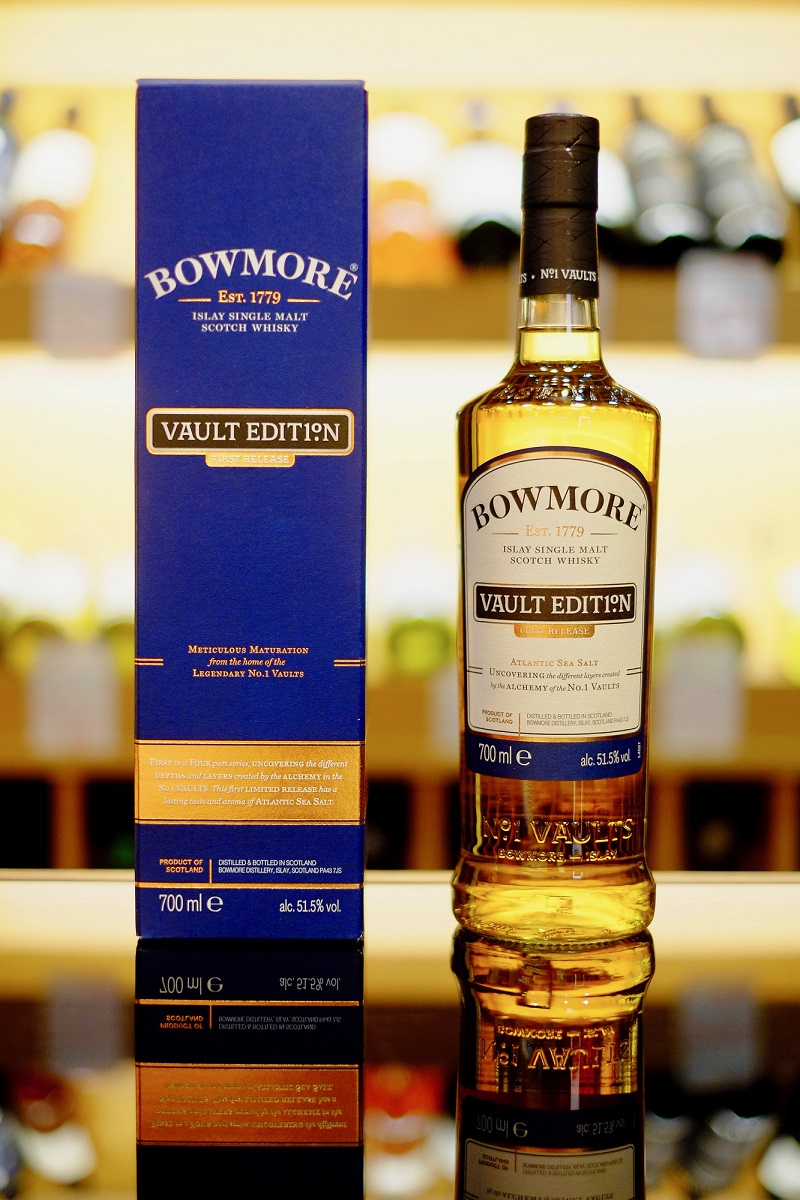 But Bowmore is not stuck in the past. The distillery continues to experiment and create different, distinct recipes for new mouthwatering Whiskies. Its latest creation is the “Vault Edit1°N Atlantic Sea Salt,” which reflects the sea spray from the Atlantic Ocean that constantly washes against the seawall of Bowmore’s legendary No. 1 vaults, the oldest maturation vaults in the world. (During World War II, Bowmore’s storage vaults for Whisky were used by Allied forces to store ammunition.)

“The Number One Vault is the oldest maturation area in the world,” Lee said. “All this Whisky has been laying for 10 to 12 years (in the Number One Vault) and when you walk in there, it’s a spiritual experience because you hear the waves crashing, you feel the salt air, you hear the weather, the wind’s coming through. And the Whisky in the barrel is breathing. The Whisky is alive.” 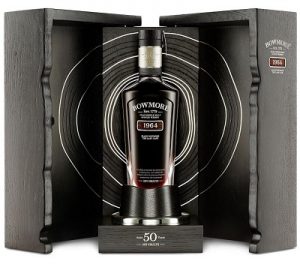 Earlier this year, Bowmore also released its last bottling of its ultra-rare 1964 distillation “Black Bowmore 50 Year Old, The Last Cask To Be Rediscovered,” with a suggested retail price of $25,000.

But no matter what Whisky Bowmore creates, it all comes back to the decomposed seaweed transformed into peat briquettes and cultivated on Islay. Bowmore cuts its own peat, which is used to fuel the fires that give its Whiskies and Single Malt Scotches their peaty flavor. Specifically, the smoke from a peat fire used to dry damp barley gives the malted grain its distinct peaty flavor. (And any leftover mash from Bowmore is then used to feed local sheep, pigs, and other livestock on Islay.)

And once you smell the smoke from a burning peat briquette from Islay, everything about Bowmore’s distinct, earthy flavors will make perfect sense. Fortunately, Lee brought a peat brick from Islay to a recent, private vertical tasting of six different Bowmore Whiskies, including four Single Malt Scotches ranging in age from 12 to 25 years old.

Using a small blowtorch, Lee burned the Islay peat brick until a thin, fine smoke began to smolder in one corner. The smell was musky, earthy, and filled with the flavors many Whisky lovers know and associate with Bowmore’s distinct Single Malt Scotches.

Lee also brought a jar full of dried barley used to make Bowmore Whisky. Tasting the dried barley toasted with Islay peat, you could instantly pick up on all the flavors that find their way into each bottle of Bowmore.

And while each Bowmore Whisky has its own unique flavor, Lee noted that “citrus and chocolate really shine with Bowmore.” (Note: If you see Bowmore for sale aged in Bordeaux wine casks, buy it. These rare, 23-year-old Bowmore Whiskies “have a unique jammy flavor you don’t normally find in many Whiskies,” Lee said.)

Lee added he enjoys the journey Whisky takes people on, especially when you participate in a vertical Whisky tasting. “Whisky brings you somewhere and it brings people together,” Lee said. “It’s something you can talk about with your friends for years to come.”

Aroma – Tropical smell with hints of orange and mangoes.

“This is actually the brother of Bowmore’s Devil Cask,” Lee said. “If you’re ever at the distillery at Bowmore, you turn around and there’s a church on the hill. It’s a round church. You know why? So the devil can’t hide in the corner. Now close your eyes. Smell the peat. It’s the first cold night. Waves are crashing. Close your eyes and bring yourself there. This one has a little more fruit. Look for mangoes and papayas.”

Aroma – Understated smell with faint hint of vanilla and cinnamon.

Tasting Notes – Cinnamon, toasted vanilla with hints of sea salt, and toasted coconut. This distinct Whisky has a bright, floral-like finish. Served neat, Bowmore Vault Edit 1°N Atlantic Sea Salt has a slow, subtle burn that smolders for more than 30 seconds after each taste. Hints of dried peaches and apricots also clearly come through in the aftertaste.

“This one has some heat on it,” Lee said. “Salty, sweet, a little vanilla. This one is quite nice. I would suggest putting a splash of water in there. The water opens it up” since it’s stronger than many other Bowmore Whiskies. “This one is also fun with chocolate.”

Aging – 12 years in Bourbon and Sherry barrels, including a final 6 months in Bourbon barrel.

“It has a nice, long, smooth finish,” Lee said. “Easy on the palate. Now try to get it on the middle of your tongue. Swish, swirl, and chew your Whisky and swallow and exhale. Again, light, approachable, smoky—that’s the peat.”

Tasting Notes – Jammy flavors mixed with hint of chocolate, cedar wood, and dried apricots. Can taste the finish smoothing out as each Scotch in the vertical tasting gets progressively older.

“This is a really fun after dinner Whisky,” Lee said. “Look for raisin [flavors] in this [Single Malt Scotch], look for the Sherry flavors you typically get—smoke, chocolate, dried fruit.”

“You get that really nice fruit and dark chocolate finish that really shines through again,” Lee said. “The Whisky has a mahogany look and a smoky, caramel taste. As Whiskies get into their teen years, they tend to get really fruity. As Bowmores get older, they tend to have a coconut-like taste.”

Tasting Notes – The epitome of velvety smooth, this dry, mahogany-colored Single Malt has a subtle, complex finish. Sherry flavors really come to the forefront, along with a splash of toasted lemon and hazelnut. Tasting the 25-year-old Bowmore truly feels like you have ascended to the peak of a mountain after a vertical tasting. The Bowmore 25 exemplifies everything this distinguished distillery does right. Outstanding. 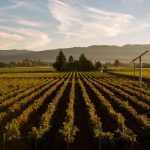 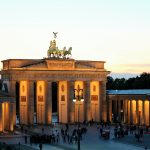