Malaga is one of the oldest cities in the world, founded around 800 b.c. by the Phoenicians. Like most of Europe, Malaga’s viticulture, and its culture, in general, owes much of its origin and development to the ancient Greeks, Romans, and Moors.

The Greeks settled in the region around 600 b.c. They quickly established vineyards, which grew in influence over the next several centuries. As the Roman Empire enveloped the Iberian Peninsula beginning around 200 b.c., Spain’s wine industry flourished. Fermenting Pots, Roman coins depicting grapes, and other wine industry artifacts found at archaeological sites near the settlement of Acinipo – which translates to “land of wine” – testify to the key role vineyards and wine played in the financial and social lives of Malaga’s inhabitants during this time.

The wine’s critical place in the region’s culture and economy even transcended religion. When the Moors conquered Spain beginning in the 700s, they, despite Islam’s prohibition of alcohol, taxed Malaga’s wine rather than banning it outright.

Following the Christian re-conquest, circa 1500, Catholic rulers granted the region’s winegrowers rights to land ownership and other concessions. As one historian notes, “To ensure a happy, wealthy and powerful city, the first thing our conquering Catholic princes did was to establish the Winemakers Guild, to ensure the continuance of the winemaking that, even under the domination of the Moors, had formed an important part of the trade and wealth of their subjects. They recognized that the vines would provide, apart from happiness and wealth for their much-loved people, a valuable asset to the Royal Treasury, due to the many profits it would provide when transferred to other realms.”

The wine reached its zenith in the mid-1800s. The city’s port was overrun with ships ready to take the wind to grateful oenophiles around the world. By 1856 the wine accounted for one-quarter of Malaga’s commercial enterprise. As many as 100 companies had been organized around Malaga wine growing, bottling and exporting, with just as many cellars dotting the cityscape.Merchants began exporting the wine in earnest at this time, fortifying it with brandy to help it remain fresh during long sea voyages. In 1620 Malaga’s producers discovered the aging, flavoring, and handling benefits of American red oak, exported from the New World by Mayflower passenger John Alden. With quality improved and shipment streamlined, Malaga’s exports skyrocketed. By the turn of the century, Russia’s Czarina, Catherine the Great, was so smitten with Malaga that she excluded it from import tax.

Again, as with most of Europe’s wines, Phylloxera brought the industry crashing down during the last quarter of the 19th century. It recovered, of course, but Malaga had lost its international momentum. Tastes changed to a preference for dry wines prevented its resurgence until recently, when the pendulum began to swing back toward sweet wines. 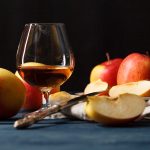