Kirsch may be a crystal-clear eau de vie, but the circumstances of its creation are as murky and mysterious as the Black Forest from which it was born. Perhaps best known for giving traditional Black Forest cake its distinctive kick, kirsch, or Kirschwasser – German for “cherry water” – has been distilled from tart morello cherries around the Rhine River valley for more than 350 years.

German monks learned the distilling trade from the Romans before the current era. Like the ancient Egyptian and Oriental alchemists, the monks’ original efforts at distillation sought to purify and concentrate essences for perfumes, cosmetics and treatments for medical conditions. They probably did not turn their hand toward production of recreational spirits until they came into contact the Moors and the alembic still during the 8th century.

Meanwhile, sweet cherries from western Asia, which had been part of classical Greek life for hundreds of years, migrated westward as Greek, Roman, Celt, and Germanic cultures intermingled. Somewhere around the Black and Caspian seas, the domesticated cherry crossbred with native Steppe (also known as Mongolian or Dwarf) cherry. The new strain, too sour to eat, found an inviting ecosystem as it continued to migrate westward to the Black Forest. The high acid content that made tart cherries inedible also made them perfect for fermenting and, later, distillation.

Ottoman invaders spread their technology and customs throughout Europe, and Black Forest dwellers were distilling eau de vie from domestic and imported wine as early as the 14th century.

Despite the abundance of plump morellos along the rolling hills of the Black Forest and Rhine River Valley, there is no indication when distillation of fermented cherries began. It is known that sometime before 1660, distillers throughout Germany, Alsace, Switzerland, and northern Italy had made the connection between cherries and distillation to obtain brandy for enjoyment. By 1662 kirsch was “help[ing] the poor man to make more song,” according to an account from the era. So much so in fact, that officials bemoaned the tendency for the poor man to overspend on and overindulge in the beverage.

By the late 19th century, the farmers who cultivated cherries were responsible for much of the kirsch-distilling industry, though there were large distilleries in the Swiss cantons that produced the best fruit Most was sent to market as soon as it came out of the still. The rest was stored in glass bottles or ash casks.

The bountifulness of the cherry crop dictated the price of kirsch. Distillers often would “adulterate their Kirschwasser by the addition of cheap spirit of wine or spirit of potatoes…the cheaper qualities consisting of about three parts of spirit to one part of Kirschwasser,” according to a journal published in 1890. Others used wine brandy or apricot-seed distillations, with almond extract added to mimic the taste of cherry stones to cut their kirsch. “But all these frauds produce a kirsch of inferior quality, which is easily recognized by the taste,” an observer wrote around the same time. 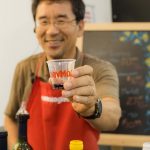