Much like the specialty wines, craft beers and small batch spirits it carries, Khoury’s Fine Wine & Spirits is a rare treasure, and one well worth seeking out.

The liquor store, located at 9915 S. Eastern Ave. in Las Vegas, is offset and obscured from the busy street, tucked as it is behind a chain café in a typical commercial strip mall. The one-story building mostly blends in with its eclectic set of neighbors, which include a mobile phone store, a portrait studio and a Japanese buffet. However, a glimpse of the store’s shaded patio, decked with outdoor string lights, hints at the hidden gem within.

While there’s certainly no shortage of alcohol in a nightlife destination like Las Vegas, Khoury’s fills a distinctive niche for local collectors and enthusiasts.

“We have the products you can’t get at the other liquor stores,” explains Issa Khoury, who owns the store with his wife, Nura. “It’s neat to meet regulars who live on the other side of town, yet drive all the way over here because they know we have the products they’re looking for.”

Over the past 13 years, Khoury has developed a strong bond with his loyal clientele, something which has formed the heart of his business just outside of Las Vegas.

“We have relationships with a few of the butler and concierge services on the Strip,” says Khoury. “Funnily enough, a lot of those guys are our customers too. The cool thing about Vegas is the [liquor industry professionals] are very knowledgeable. They work at some of the best bars and restaurants in town and they are looking for the same products they serve there.”

It’s not just about shopping, though. A lounge to the left of the retail area offers wines by the glass, rotating beers on tap, a handful of barrel-base table tops, Wi-Fi, books and board games. Customers can sip on a 2015 Duckhorn Paraduxx while writing the next best American novel, and buy a bottle (or three) on the way out.

This hip, yet accessible vibe attracts diverse crowds for weekly craft beer tastings on Wednesday nights, wine tastings on Thursday nights and tons of keg tapping parties, as well as a Booze Yoga class. Khoury explains the ethos behind this unique and involving approach;

“Instead of just popping into your liquor store, buying a bottle of wine and rushing home, some people come here, have a glass of wine, walk around and relax,” says Khoury. “A lot of people come in here with their laptops and they’ll just sit here for hours and work on their computers. It kind of forces them to take a step back and chill for a minute.”

Liquor industry professional Mike Majano is a regular at Khoury’s, stopping by a few times of week to unwind and work on his laptop in the lounge.

“Whether I was in the industry or not I would still come here because of the welcoming atmosphere,” he says. “It’s really cool to have a bar, without going to a bar.”

Majano complimented the diverse beer selection and “eclectic list of items” at Khoury’s.

The son of a grocery store owner in Northern Nevada, Khoury grew up in Elko and moved to Las Vegas for college, knowing he eventually wanted to open up some sort of business.

After graduating with a degree in marketing from the University of Nevada Las Vegas, he took a job with a liquor wholesaler. While increasing his fine wine, beer and spirit expertise on the job, he began to see a gap in the city’s liquor market.

“Vegas was only big box stores at the time,” recalls Khoury. “I wanted to sell the smaller brands that were being overlooked by the big stores.”

Khoury’s aims to indulge the inner wine, beer or spirit geek of its customers. The store consistently offers edgy, new products and helps fulfill special orders or personalized requests for those seeking strange, unconventional or ultra-small brands. There’s even a cooler exclusively dedicated to local breweries, which chimes perfectly with the US’s ever-growing obsession with the small batch, the authentic, and the craft-based.

Because he runs a smaller, independent store, Khoury has the ability to be more proactive when it comes to launching and carrying new brands and products. Often his store is the first in town to launch and carry them – something he clearly takes great pride in.

“If they bring in a new product today, I can have it for you tomorrow,” he says. “A lot of times, when you go to a bigger chain, even a local one… they’re slower to respond. They may take weeks, even months to get it on the shelves, to get the pricing right, to get it in the system and get the stores all synched.”

For certain products, such as rare Bourbon, Khoury’s helps out the local community by sponsoring a charity event, rather than selling the bottle at a high price on a first-come, first serve basis.

Pappy Van Winkle Bourbon, for instance, is only available once a year (despite the fact that customers ask for it a few times a week). While the Bourbon could sell for $1,000 or more because of the high demand, Khoury’s pairs its sale with a toy drive and sells it at the actual release price.

“The only way you can buy the bottle is if you donate a toy to the toy drive,” he explains. “Then you get a ticket for a chance to buy the actual release price.”

Khoury’s maintains competitive pricing thanks to strong relationships with suppliers, wineries, and customers. As Khoury puts it, customers should shop at the big box stores for wholesale prices on large quantities of common liquor brands, “but, if you want recommendations, or you want a little more hands-on service, Khoury’s is the place to be.”

The diversity of international spirits and rarest of rare collectibles brings customers to the store on a regular basis, and herein lies the secret to the store’s successful rapport with its dedicated fanbase.

“We get to know their palate, their taste,” says Khoury. “We walk around and show them, and I’ll say: ‘we just got this and we just got that, and I think this is right up your alley.'”

Khoury has no incentive to move particular products so he solely relies on customer feedback when making suggestions. “Before I ever make a recommendation, I talk to them,” he says. “‘What do you normally drink? What dinner are you going to have?’  You ask them a couple of questions, you engage in conversation.” It’s an approach based on mutual respect and on a genuine excitement for the rare and unusual in the spirit world, and it’s clearly an effective one, too.

For his super high-end customers, Khoury occasionally organizes personal tastings with reputable Napa Valley winemakers. “In a few cases, we travel to their home and take care of their wine cellar for them,” he says.

As for Khoury’s own home, he has nothing more than a 50-bottle cooler – something which he claims constantly takes his friends by surprise.

“People are always shocked because they’re expecting some big walk-in wine cave, but I have the shop,” says Khoury. “If I ever need a bottle, I just go to the shop…”

For more information on the selection at Khoury’s Fine Wine & Spirits and a calendar of events, visit their website. 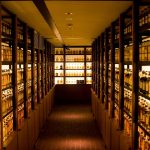 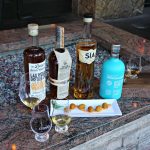