Stephen Webster is one of the most exclusive luxury jewelry brands in the world, with flagship stores in both Los Angeles and London, and a huge list of celebrity clientele. This is a British brand through and through, and it has won countless awards for its excellent craftsmanship and its exceptional product line.

Stephen Webster is the Creative Director of the company that carries his name. This jewelry designer was born in Kent in 1959 and spent his formative years learning his craft in several London design houses. In 1982 Webster was tasked with setting the Diamond Stakes Trophy, an award commissioned by De Beers that was set to become the most coveted trophy at Royal Ascot.

This was a huge honor for the young Webster and one that marked his passage into the world of fine jewelry. After this, he spent some time in Canada working for an independent jeweler, before sensing an opportunity in California to sell his own jewelry. He created bold, iconic, and unashamedly British designs, and these were snapped up by the wealthy and fruitful in the Golden State.

In 1989, Webster made his way back to the United Kingdom and established the company that continues to carry his name to this day. The philosophy of crafting beautiful, handmade pieces using traditional methods remains the same, however, over the years, his list of clientele has grown considerably. The Stephen Webster company has crafted pieces for supermodels like Kate Moss; actors like Johnny Depp, Sharon Stone, and Cameron Diaz; and a huge number of rock, rap, and pop stars, including Madonna, Elton John, Ozzy Osbourne, Pink, Jay-Z, and Christina Aguilera.

The Stephen Webster style can be described as elegant luxury with a musical flavor. Their expertly crafted pieces combine the finest materials with traditional craftsmanship. However, the founder also brings his love of music into the design process, and this shows in most of their collections. This is helped by the fact that Stephen Webster’s creations have adorned the hands, wrists, and necks of many of the world’s biggest stars of the stage, with an influence that continues to be felt throughout the UK and US music scene.

The Stephen Webster style can be described as elegant luxury with a musical flavor.

The Bulldogs and Union Jacks that so often appear on Stephen Webster pieces are more reminiscent of the punk rock era than of full-blown patriotism, but there is definitely a touch of British pride. And that’s okay, because it all adds to the individuality, to the uniqueness, and to the Britishness, which is something that is appreciated on both sides of the Atlantic.

Stephen Webster is high fashion for men who pride themselves on the way they look. It’s luxury not for luxury’s sake, but the quality that can be felt in every cut. Some of our favorite pieces from the Stephen Webster collection include:

Switchblade Pendant: Part of their England Made Me series, this unique pendant is molded into the shape of a switchblade, the handle of which is Mother of Pearl with rhodium plating, with the rest of the piece crafted from 925 Sterling Silver. This is available in several colors.

Revolutionary Clasp: Another piece from the England Made Me series, this contains a clasp that is set in the finest rose gold and decorated with glittering, black jewels. Perfect for the gentleman who is not afraid of a little bling, but still wants a look that is refined and clean-cut.

Zodiac Cufflinks: Cufflinks are designed to stand out, even when the rest of the suit and the jewelry is designed to blend in, and these cufflinks will certainly do that. Stephen Webster sells cufflinks in a range of zodiac symbols, our favorite of which is the Taurus Cufflinks, complete with fierce red eyes and a gold septum piercing.

Smoking Gun Tie Pin: Stephen Webster creates simple, elegant tie pins, combining traditional craftsmanship with quality materials to create a timeless piece. However, if you want something a little more out-there, a little different, the Smoking Gun Tie Pin could be it. This is a handgun complete with swirling smoke. It is made from 925 Sterling Silver, with black and white rhodium plating.

For the right price, the Stephen Webster design studio can help you with your own bespoke creations. These combine all the skill of their experienced designers, with the elegance and refinement that has made Stephen Webster such a sought-after luxury brand. Whatever it is you want to create, they can help. They work with the customer from the initial design sketches, through the build and to completion, ensuring they get a truly bespoke piece that is made to their precise measurements and taste.

According to their own website, the Stephen Webster bespoke service has crafted, “…pieces as diverse as champagne flutes set with Tahitian pearls, beautifully engraved cutlery sets, a custom Harley Davidson motorbike, diamond-set dog collar, jewelry, and cufflinks boxes, and engraved pens.” They also created the aquatic themed “Jewels Verne” collection, which includes bracelets valued at around $24,000, and a “Fighting Fish Cuff” that is exhibited at the Victoria & Albert Museum as part of a showcase of exceptional British jewelry.

If you want to bring Stephen Webster onboard for that special piece of jewelry, whether to create something from scratch, to bring a historical piece up to date, or to restore an antique, simply drop into their Beverly Hills or London stores. You can also contact them by phone, dial 310 246 9500 in the US and 0203 298 0970 in the UK.

The hard work of Stephen Webster, both the man and the company, has helped to change this industry for the better. In his own words, “The fear factor, the reverence, and the rather staid formality have all but disappeared.” It’s no longer considered “ostentatious” to wear expensive jewelry, and it’s no longer considered over-the-top to commission such pieces. It’s fashion, it’s style, and in certain circles, it’s a way of life. 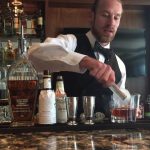