Delicate, reverent, meticulous—these characteristics encapsulate the essence of Japanese culture and are the impressions I gleaned from a recent sojourn in the Land of the Rising Sun. They also describe the latest book from award-winning whisky expert Dave Broom, The Way of Whisky. It is a delightful account of his journey around Japan by way of its distilleries, searching for answers as to why Japanese whisky is distinct from other whiskies of the world.

It’s not often you find a tome about whisky that reads like a travel journal. Broom’s intimate insights, coupled with the inspiring photography of Kohei Take, lead to nooks and crannies in Japan that are perhaps known only to “whiskyphiles.” Each chapter focuses on a particular distillery—its history, style, master blender, facilities, and tasting notes. Interspersed between chapters are nuggets of information on topics such as umami, Zen, kaiseki, and the tea ceremony; these give the novice, expert, and even clueless non-whisky drinker an easy-to-digest diversion from the more technical aspects of distilling.

Indeed, the Japanese apply the same exacting standards—perhaps even more so—to whisky making as they do to food, services, crafts, and infrastructure. And while the basic process may be similar to Scottish, American, or Canadian whiskies, where it differs is a matter of culture that is difficult to pin down. This echoed my search for answers while writing about samurai warriors and what makes them fearsome and different from other warriors. Stature and weapons aside, the answer I believe lies in their style, strategy, mindset, and meticulous attention to detail. The same principles apply to whisky making in Japan.

They aren’t showy, they don’t shout. They are discreet but intense

The synergy between culture, rituals, religion, and art also come into play, all influencing the craft of making whisky in ways only the Japanese can. Broom is particularly amazed by “how closely the approach of Japan’s whisky makers is to that of the country’s traditional crafts. The same principles of clarity, modesty, intensity and ‘calmness’ pervades the whisky. They aren’t showy, they don’t shout. They are discreet but intense.”

It is unlikely that any corner of Japan was spared from the ravages of the civil wars fought by rival samurai warlords for hundreds of years. This is especially true of the town of Yamazaki on the outskirts of Kyoto. It was here that the Battle of Yamazaki took place in 1582 when daimyo Toyotomi Hideyoshi avenged the death of his master, Oda Nobunaga. It was also here that Japan’s oldest malt whisky distillery, Suntory Yamazaki, was founded in 1923 by Shinjiro Torii, due to its auspicious location as the source of Japan’s purest waters. Suntory recently released its 18-year-old limited edition of the Yamazaki Mizunara single malt, labeled with Echizen paper to reflect Japan’s ancient papermaking tradition, and packaged in a cabinet-style box made from old oak barrels.

The aged whiskies of Japan have flown off the shelves since garnering prestigious awards over the last couple of years. But supplies are dwindling. In the meantime, Japan’s distillers are hard at work producing the finest NAS whiskies. Can a NAS stand up to a 12-, 15-, or 25-year old whisky? Broom’s opinion is that “It depends how good the NAS is! There is a difference between age and maturity. Age is a number, and maturity is a character, which comes from the interaction between the cask and the spirit. In other words, you can have a 25-year-old whisky, which hasn’t reached maturity, and you can have a 10-year-old, which could be over-mature.”

“My advice is not to be led by the age, but by the taste, balance, complexity, and flavor. Not having an age statement allows the whisky maker a wider range of flavor opportunities picked from the arc of maturity than if he or she has to work from an age statement where the youngest component is the number, which will appear on the label.”

Throughout the 17 years, Broom has been exploring the depths of Japanese culture and whisky making, there were many lessons to learn and surprises along the way.

In such a competitive market and with the growing demand for Japanese whiskies, I asked him what whisky distillers around the world can learn from the Japanese style and process: “Although this might sound glib, I believe that the Japanese make the best Japanese whisky in the world. The Scots make the best Scotch, the Irish the best Irish … and so on. In other words, they have all crafted their own style — a whisky that reflects place, climate, the palate of the people, and the manner in which they like to drink it. That’s what the book is about: what makes Japanese whisky ‘Japanese.’ I don’t think anyone would try to make Japanese style whisky elsewhere in the world, but they could (and do) share information about production, just as the Japanese distillers still learn from their colleagues around the world.”

That’s what the book is about: what makes Japanese whisky ‘Japanese.’

“What I think could be taken on board is the ‘kaizen’ mentality of incremental improvement. Japanese distillers are never happy. They always wish to improve their whisky and that can mean radically changing how it is made. In the rest of the world, consistency is the main aim. I prefer the Japanese approach.”

Where does the future of Japanese whisky go from here? “Production capacity is indeed being increased and there are some distilleries reopening after years of silence (Mars Shinshu is a good example), while there are a number of brand new distilleries started up in the past couple of years. The future is good.”

The future is exciting indeed, not just for fans of Japanese single malts, but also for NAS blends. I can also see the Highball becoming a trend, alongside cocktails that incorporate Japanese whisky in the mix.

The Way of Whisky is a joy to read, a book you can dip into for inspiration about Japanese culture. Broom’s expert knowledge about Japanese whisky and his deep connection with the culture shine through. I can’t wait to visit Japan again and immerse myself in the “Japanese way.”

Dave Broom has been writing about spirits for the last 25 years and has won numerous awards. He authored Gin: The Manual and The World Atlas of Whisky, and two of his books — Drink! and Rum — each garnered him the Glenfiddich Award for Drinks Book of the Year.

He was also bestowed the Glenfiddich Drinks Writer of the Year and the 2013 International Wine and Spirit Competition Communicator of the Year awards. Aside from writing about spirits, Dave is also actively involved in lecturing and designing in-house training courses for distillers.

The Way of Whisky by Dave Broom is published by Mitchell Beazley, £40 (www.octopusbooks.co.uk) 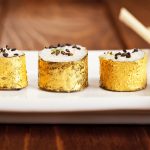