After years of anticipation—and intensive construction—phase one of Washington, D.C.’s The Wharf development debuted last fall. And with its arrival, the entire southwest waterfront corridor of the District has been transformed.

With all of the great additions at The Wharf, clearly, visitors would need a place to stay, too. As such, it’s not a surprise that one of the key projects at the heart of the development is a starry hotel. Enter the new InterContinental Washington D.C. The Wharf, a luxury property with 278 rooms including 33 suites, as well as what’s been dubbed The Constellation, a two-story presidential suite with panoramic river views sure to be perfect for your next informal meeting of high-ranking international emissaries. 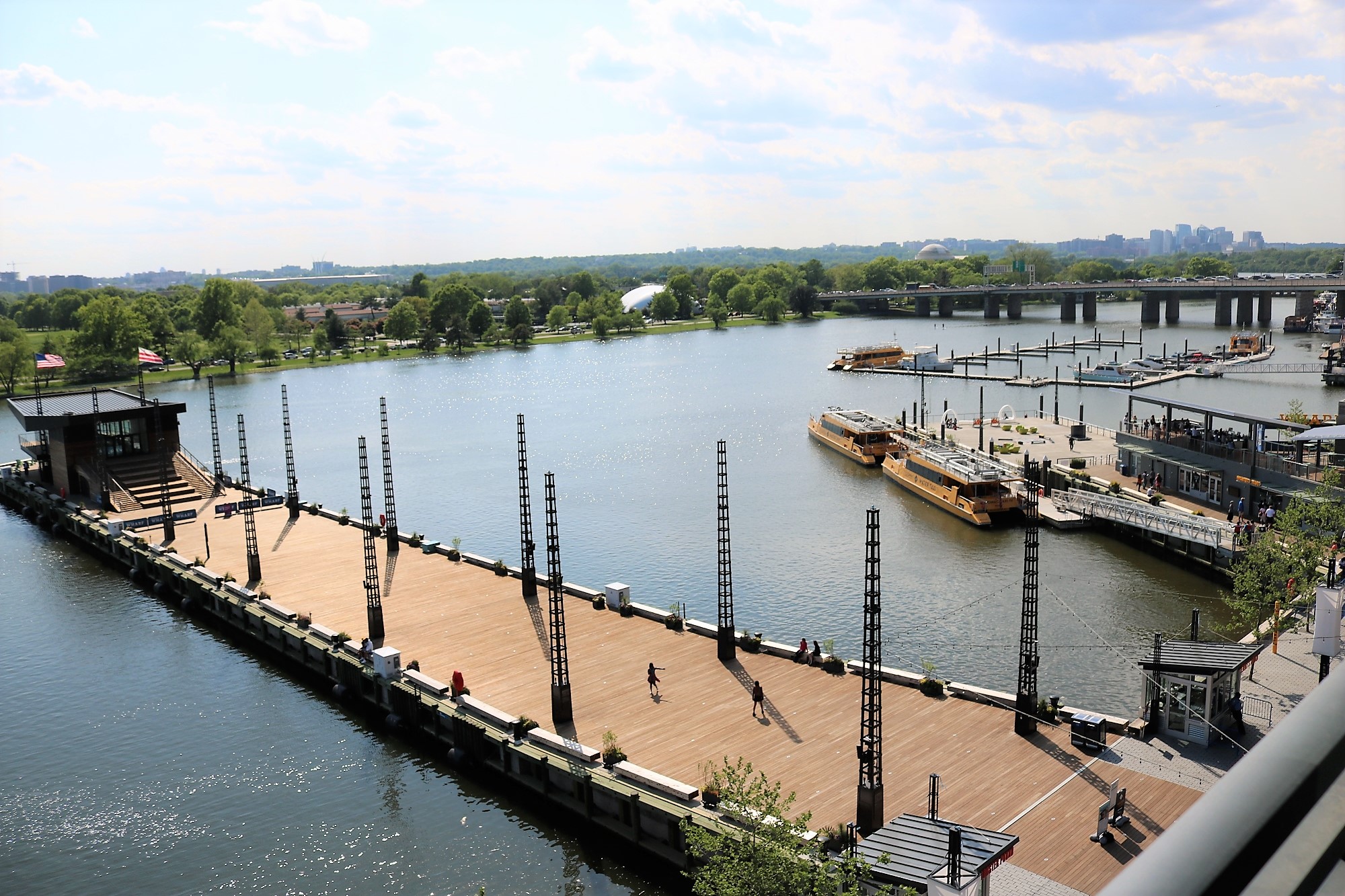 Rooms offer a mix of classic luxury design—think marble bathrooms with spa-worthy showers—with high-tech amenities, such as touch-panel room controls. Many rooms offer waterfront balconies as well, while suites may be equipped with unique features ranging from billiards tables to monster television screens. The hotel’s L’Occitane Spa is set to open later this year, joining the spacious, well-appointed fitness center and providing yet another means of diversionary time spending in addition to the rooftop pool.

For tourists with sightseeing on the agenda, the hotel and The Wharf as a whole offers an ideal jumping-off point, just minutes away from the National Mall, and its endless array of museums, monuments, and cultural attractions. For frequent business or politically minded travelers, it’s a mere 10-minute taxi ride from Reagan National Airport, adding to its convenience.

Even for guests who aren’t coming from afar, The Wharf is immersive and transportive enough that it’s a legitimate staycation to put on your local radar, too. Catch a concert, grab a meal, spend the night, and bring the pooch, too—the hotel is pet-friendly. 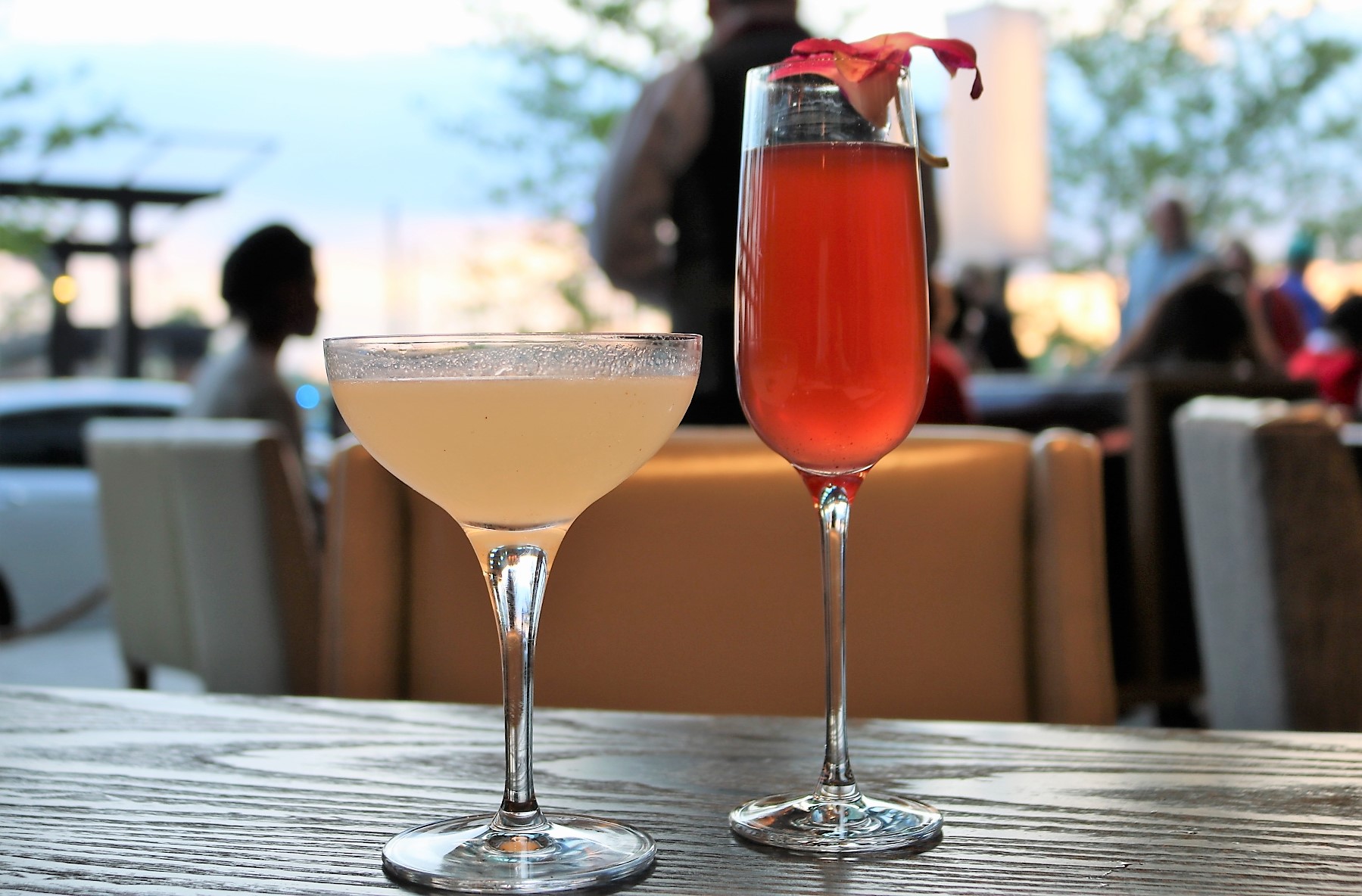 The lobby of the InterContinental Washington D.C. The Wharf is home to Kith and Kin, the highly touted restaurant from Top Chef alum Kwame Onwuachi. It’s Onwuachi’s second project in the District, after his ambitious, but ultimately short-lived and ill-conceived, Shaw Bijou. Don’t call this a comeback, though, as Onwuachi wasted little time jumping right back in the saddle for the Afro-Caribbean Kith and Kin after getting his culinary bearings with some global travels and flavor-finding missions. And here, it’s all Onwuachi at his best, tying into his roots and a range of cultural influences to deliver bold, memorable dishes.

The menu showcases a mix of smaller plates and large-format entrees, along with a section encouraging you to “eat with your hands… if you wish.” There, find homey but supercharged dishes such as goat roti, a hearty bowl of goat and potato curry served alongside a massive dhal puri (or dhalpuri) roti. The dish is indeed best enjoyed with your hands as you rip off a corner of nearly tortilla-thin roti, and scoop up a few bites of a thickly sauced goat.

To be cliché about it—it kind of has it all. But you should just go and see so for yourself

Don’t pass up on the show-stopping presentation of the whole fried red snapper, topped with herbs and brown stew sauce. Rip off the perfectly fried, crunchy skin of the fish to reveal the tender, moist bites underneath, and then just close your eyes and pretend you’re beachside at a Caribbean fish fry, or, drawing from my own personal experience, in the humid air of a Southeast Asian island. You may not be there, but when you open your eyes and see the waterfront-scape of The Wharf along the Potomac River, and the lavishly adorned dining room, featuring a mural from D.C. artist Meg Biram, you should still be content enough. 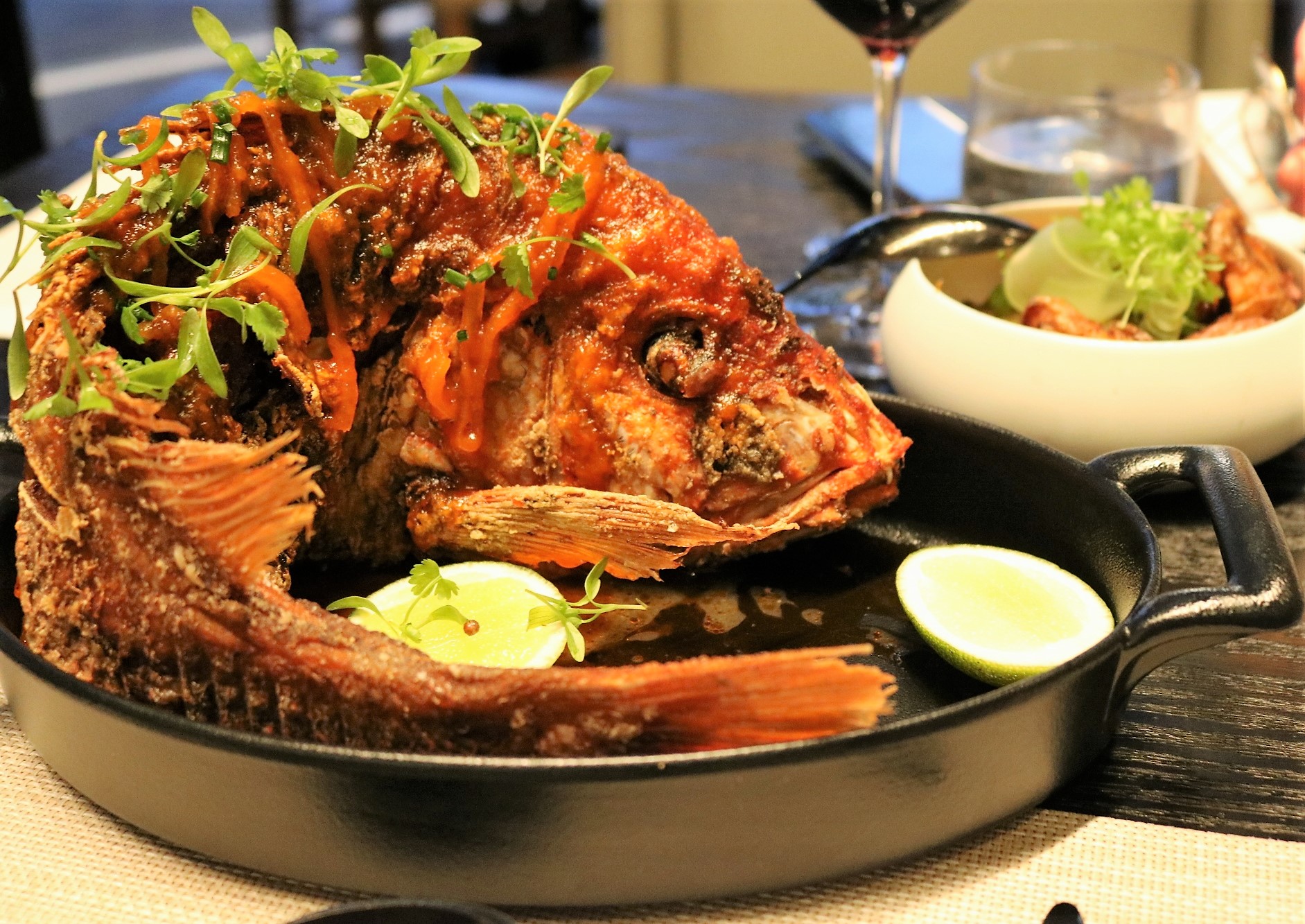 The menu is short and concise, making it feel approachable as if you and a guest could sample your way through most of it. Try the beef patties with calypso sauce or the lobster sliders with Meyer lemon remoulade as a starting snack, move to a charcuterie plate, then add a satisfying vegetarian side such as spicy red lentils or a dish dubbed “mushroom forest,” with roasted mushrooms, a mushroom spread, and charred eggplant dip, all gobbled up with crispy Moroccan pancakes called msemen. Finally, move onto a proper large plate, such as the aforementioned snapper, a jerk half chicken, or gumbo.

Before or after dinner, you may want to consider strolling right across the walkway for a drink at The Watering Hole, a casual outdoor bar perfect for welcoming the sunset with a beer or glass of wine in hand. If not, Kith and Kin still has you covered with outdoor seating and its own bar area.

Just how massive of an undertaking was The Wharf? Phase one alone reportedly cost about $2.5 billion. Thankfully though, even with the many great new additions, the development preserved the historic Maine Avenue Fish Market, a local institution founded in 1805 and regarded as the oldest open-air fish market in continuous operation in the U.S. Construction work on the second phase is beginning, and with more than 1 million additional square feet of space being developed, that figure will likely double by the time all is said and done. 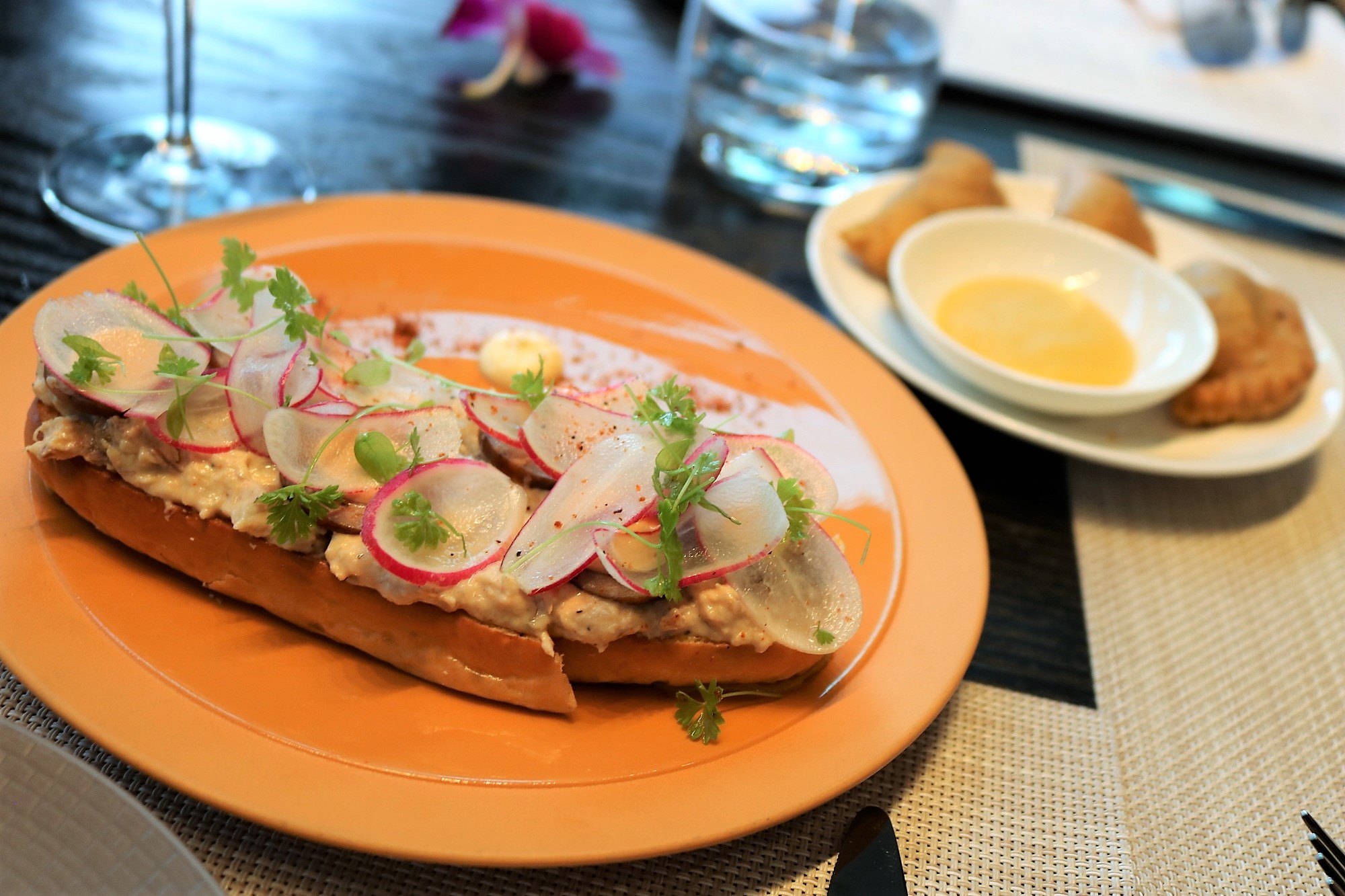 Already there are over 20 restaurants and bars at The Wharf, including high-end restaurants such as Del Mar de Fabio Trabocchi, and forthcoming projects such as Officina by Nicholas Stefanelli. If you’re a big-name chef with D.C. ties (and Michelin stars) chances are you’re looking to establish yourself at The Wharf. There are also outposts from national chains such as Shake Shack and Milk Bar, and local favorites, such as Taylor’s Gourmet sandwiches, Dolcezza Gelato, Hank’s Oyster Bar, and Lupo Marina, an offshoot of 14th Street’s Lupo Verde.

The Wharf also showcases several concert and event venues and a dozen acres of parks and green space. There are shops and boutiques, a variety of outdoor events and activities, and plenty more still to come, too—such as another distillery to add to the D.C. scene in the form of Todd Thrasher’s exciting bar and distillery, the Potomac Distilling Company, and sure, let’s add more oysters to the mix, too, with Rappahannock Oyster Company.

The Wharf also features condos and apartment buildings, a new water-taxi service that can take you to Georgetown, Alexandria, or The National Harbor, and hundreds of boat slips along several piers, also featuring a yacht club.

To be cliché about it—it kind of has it all. But you should just go and see so for yourself. 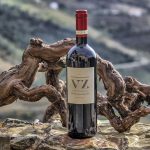 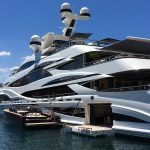