Venice is an adult fairytale come true for many travelers, with fantastical architecture around every corner, engrossing history to absorb, and a wondrous world of indulgent food and wine. Perhaps the sole thing the city has been missing is a proper cocktail joint, one that stretches the limits a bit further beyond the Aperol Spritz. Enter Alessandro Zampieri’s Il Mercante, a storybook cocktail bar that’s a perfect match for Venice, and one that immediately raises the city’s drinking credentials.

Il Mercante, or The Merchant, is so named for famed Venetian explorer Marco Polo. The bar opened in summer 2016, debuting with an ambitious menu based on Polo’s travels. Each cocktail was linked to a destination Polo was said to have visited, incorporating flavor components and ingredients, such as specific spices, from those different regions.

“Stories are easier than ingredients to remember,” Zampieri said during a visit to his bar. “We want every cocktail to tell a story.”

It’s all part of the effort to both encourage locals to step outside of their comfort zones by seeking out cocktails, while at the same time becoming a go-to waypoint for today’s globetrotting modern explorers searching for refreshment. It’s working, too, with the bar taking on more of a local feel on the weekends while tending to cater to more tourists during the week—visitors such as myself who nearly can’t believe their good fortune of finding world-class cocktails in the heart of Venice after days spent sipping from a strict spritz diet.

Venice is an adult fairytale come true for many travelers

Cocktails are simply not a key component of drinking culture in Venice, at least not in the same way as in the United States, for instance. In Venice, cocktails may be served from places such as tiny, standing-only walkup bars offering simple, stripped-down drinks and quick bites of food. “That’s the Venetian way,” Zampieri says. A group of friends may pop into a string of them over the course of an evening, rarely lingering long, let alone drinking anything that would fall into the category of a “craft cocktail.”

But that’s not what interested him, at least not for the type of place he wanted to run. Instead, Zampieri drew inspiration from the first wave of Italian bars carrying the torch of the modern cocktail movement in Italy, establishments such as Milan’s Nottingham Forest from Dario Comini. “Dario changed my perception of what cocktails, and what this job, could be,” Zampieri says.

Eventually, after plenty of his own global adventuring from Scotland to Barbados and beyond, and after a long period of time searching for the correct opportunity, Zampieri finally took his chance. “When I found this bar, this was a dream,” he says of the two-story space formerly known as Caffè dei Frari and dating at least as far back as 1870. With the right space and plenty of personal and professional inspiration, he knew it was time to begin his own project and to introduce something entirely new to the city.

“Something was missing in Venice, which is why I wanted to open a place like this,” Zampieri says. “The only other cocktail bars are inside the hotels, but that’s not what people want.” Venetian hotel bars are just about the polar opposite of those walkups—expensive and stuffy, yet still not offering particularly exciting cocktails.

When I found this bar, this was a dream

Zampieri had to bridge the gap, and the best way to pursue his passion while appealing to both locals and tourists was through the conceptual journey menu he dreamed up—to tell a story rather than simply list ingredients on a menu. “The bar’s aim is to let its guests travel around the world in order to discover the history and traditions of distant lands through their flavors and scents,” he explains.

From Marco Polo to Magellan

So it is that the original menu featured drinks such as the Java Island, including the pungent Batavia Arrack which originated in the region, with flavors such as galangal syrup and lime. Marco Polo may have A Tea With The Khan, a Calvados cocktail with matcha tea and pink pepper, or he may go Down The Forest, represented with barrel-aged Gin, dill-infused Cynar, and a porcini mushroom tincture. These are just a few of the wildly inventive cocktails among the 18 which made up the original Marco Polo journey menu.

For year two, Zampieri said his farewells to Marco Polo and based the new menu on the circumnavigation of Ferdinand Magellan. “Just like real explorers, we are always looking for new experiences and that’s why every year we create a new main menu, a new trip around the world through history,” Zampieri says.

The menu was further enhanced with a drink classification system across several characteristics, including sweetness level, alcohol intensity, and style, such as long and on the rocks, or short and served up. In this go-round, Zampieri is also showcasing a rotating selection of seasonal cocktails, and a dedicated icon section of the menu where he offers guests a detailed history on a classic, in this case the Martini, while showcasing half a dozen different riffs and interpretations.

Magellan may encounter deflated sails and reach for the African Dead Calm, a citrus-infused Vodka cocktail incorporating sumac chutney, cape gooseberries, Moroccan peach bitters, rooibos tea, and a Muscovado sugar soda, or he may finally reach land, represented by the Terra! cocktail and its tastes of the new world, with both Cachaça and Mezcal alongside açaí and beetroot puree, passion fruit, a green coffee cordial, and Mexican mole bitters.

Just like real explorers, we are always looking for new experiences

Guests may end up ordering based on a place, on a story, or on a particular ingredient of interest. Either way, they’ll discover something showcasing an elaborate level of thought and execution, intricately planned and fine-tuned to the smallest of details.

Of course, if you care to have is a spritz, you can get that, too. Though Zampieri may spruce it up a bit, at least. “I can’t tell people they can’t have a spritz in my bar… though maybe I thought about it at first,” he said with a laugh.

Instead, Il Mercante bottles their own spritz variations using fresh juices and ingredients. “You can drink a spritz everywhere in Venice, so we make our own version here now,” Zampieri says. “You can drink whatever you want, so if you want a spritz I’ll make the best version that I can.”

Zampieri, though, does insist on laying down the law elsewhere. “We only have one rule,” he says. “You cannot be in a rush here.”

So grab a seat, take your time, and let your imagination run with the thematic menu while sampling one of Zampieri’s latest creative concoctions. The concept and the service, and of course the drinks themselves, all work together to make Il Mercante a must-visit destination on your next personal world journey. 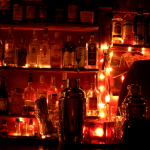 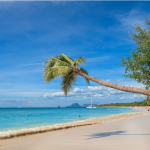