The world of supercars rarely offers any dull moments. It’s an industry which thrives on speed and innovation, technological advances and gadgetry which yearly outdoes itself, and constantly throws up new surprises for those willing and able to seek them out. Records are annually smashed, impossibly high standards are continually exceeded, and one never quite knows what to expect from each season of new releases.

There’s no doubt about the fact that last year was something of a vintage one for supercars and hypercars. Despite worldwide economic uncertainty, high-powered dream machines stayed well and truly within the realms of wish-fulfillment and realized fantasies. It was a year in which electric motors proved their worthiness, and justified the amount of time and money many big brands had invested in them. The once-unimaginable world of the self-driving car began to fully manifest itself in reality, and luxury car manufacturers seemed to be ever shooting at the moon with their ambition in this regard… only to find their ambitions more than paying off. Gadgets grew more advanced, interior and exterior design reached new heights of beauty and decadence, and modern classics and future collectibles were born.

We may be only one-month in 2018, but it’s already shaping up to be even more impressive. All of the biggest names in the world of luxury motoring have now released their teaser trailers and have attended to major car shows worldwide, and from the promotional material and snaps available, the remainder of this year has plenty of treats in store. Faster, sleeker, more advanced than ever before, and building tangible bridges to the future of motoring as we know it, many of the cars we’re starting to see in 2018 are sure to be game-changers in the truest sense of the word. Let’s delve right in, and take a look at the five supercars that are tipped for the greatest success as this year progresses, and those which have the speed demons and luxury enthusiasts among us salivating with anticipation.

Is it possible to not get excited about a new Bugatti release?

Is it possible to not get excited about a new Bugatti release? We think not! Few supercar brands on earth have the kind of fervent following and sense of anticipation that surrounds this one, and the news about the 2018 Veyron has sparked intrigue and excitement in equal measures over the past few months. The latest model to come out of Bugatti is proof indeed that the imagineers of this company are very much on top of their game – and very much looking to the future – as it delivers everything you could wish for from a new Bugatti… and more besides.

The design of the 2018 Veyron is utterly stunning. Elements are borrowed heavily from past successes, so while it piles on a dazzling array of new features it still feels very much like a classic Bugatti in its modeling. The result? A car which raises the bar when it comes to sheer beauty and grace while packing an earth-shattering punch with its raw power and doubtlessly high level of driveability. With a quad turbo V16 8 liter engine, it’s capable of hitting top speeds of 250 mph. Thanks to its 1000 horsepower, the driver of this dream machine is going to be able to feel every speck of that monumental force beneath its hood.

The 2018 Veyron is also proof that the engineers of Bugatti aren’t afraid to think outside the box and be a little experimental in their design. This is a hypercar with a four wheel drive option – something we’ve rarely seen – giving drivers more options when it comes to pushing the vehicle to its limits. However, despite these innovations, all the luxury fittings we’ve come to expect from this most luxurious of car brands are very much in place: a next-generation entertainment system allows you to rock out in impeccable style, and the interior is decked out in soft, utterly luxurious calfskin – perfect for a decadent day of head-turning driving on the open road.

When you see the photos doing the rounds on the internet of the McLaren P14, it warrants something of a double take. While the cars produced by this flawless UK brand are often the very definition of dream machines, this particular model really does look like it has dropped out of a futuristic computer game. The bodywork is just incredible – few cars have ever managed to look as aerodynamically perfect as this.

The front end is impossibly low and it rises dramatically to a boisterous rear, giving the impression of a snarling animal, poised and ready to leap at any moment. We’re told that the McLaren P14 utilizes the very latest in mono-cell carbon fiber tub technology, and has been carefully designed with a whole new way of approaching aerodynamics… and looking at the shape of this incredible car, it’s easy to believe that is indeed the case.

Beneath that impressively low-slung hood, we find a 3.8-liter V8 engine, packing 700 horsepower and capable of hitting blistering top speeds. The technological wizardry by no means ends with the engine, though – this McLaren has taken the latest innovations in intuitive computerization and absolutely ran with them, meaning the onboard tech of this car really is of the next generation.

Aston Martin have long since defined their legendary status in the supercar world. The Vantage has never ceased in re-inventing itself; it’s a model which acts as a sponge, soaking up all the latest and greatest innovations in the industry, and polishing them until they are at their peak and the very essence of luxury and excellence. It should come as no surprise then, that the 2018 release of the Aston Martin V8 Vantage AMR has been met with swooning appreciation and a renewed level of respect for what this British manufacturer is able to achieve.

For most of this year, the latest in the Vantage range was shrouded in mystery. However, since this car has done the rounds at various auto shows in Europe and beyond, it’s been roundly hailed as a triumph and a true reminder as to why Aston Martin has cemented itself as a world leader on the luxury car scene. It’s unmistakably a Vantage – those smooth curves and distinctive body shape are impossible to confuse with any other brand – but this is a sleeker, sexier, more streamlined and racier version than any we’ve seen before.

With its newly long-slung body, the Aston Martin V8 Vantage AMR is a stark reminder of the fact that Aston Martin is, and has always been, essentially a racing brand; the car manages to look as though it is traveling at speed, even when stood still. The main development (apart from the endless list of new gadgetry and various transmission changes) is that Aston Martin have managed to sling off 300 pounds of weight from the previous model. That’s a considerable amount of heft removed from an already sleek and lightweight design and will mean that the Aston Martin V8 Vantage AMR will be even faster and exhibit better handling than any Vantage that has come before. Impressive indeed, even by the standards of this impeccable brand.

If there’s one supercar brand which never fails to get tongues wagging in preparation for a new release, it’s Ferrari. Indeed, there’s no supercar brand quite like it on the planet: deeply associated with a sense of style and masculine, metropolitan elegance, Ferrari manages to pull it out of the bag again and again. Their challenge, however, in recent years has been to combine their timelessness and vintage appeal with the demands of a younger, contemporary audience, with all of the technological advances which goes along with this. Their release for this year, we’re happy to say, manages to do all of this… and much, much more.

We’ve seen images of the new 488 GTB, and it looks like all of our teenage dreams have come true – this is an absolute beast of a car. A revolutionary body design seems to take inspiration from stealth fighter planes, and the new spoilers which undulate out from the body seem to confirm this, thanks to their added aerodynamic boost. It’s angular, muscular and looks unlike anything else on the market at the moment – exactly what was needed from a 2018 release, and something sure to make it a future collectible.

One rumor which has now been confirmed is that the 2018 488 GTB is going to have a new ‘sound’ – something which has caused ripples of excitement, as nothing quite beats the deep, earth-shuddering roar of a Ferrari. However, with its game-changing 3.9-litre V8 engine and top speed of 205 mph, who knows what this magnificent piece of Italian supercar design is going to sound like? We’re certainly excited to find out for ourselves.

German car giant Mercedes has dipped its toes into the world of supercars at various points throughout its history, and often with highly pleasing results. The Mercedes AMG GT-R, released next year, is going to cement this brand as a credible competitor to Bugatti and the like in the supercar market – it really is that impressive.

The exterior design of the Mercedes AMG GT-R is simply unforgettable; this is a car with serious attitude, and it has a ferocious look which is far more masculine and ambitious than previous efforts have been. With its large signature Mercedes grill, beefy low-riding body and outwardly curving body, it has a hot-rod appeal which is no doubt going to be turning heads and setting imaginations alight on its release in the new year. Of course, it isn’t just about the looks, though – the Mercedes AMG GT-R packs a serious punch on the road. Boasting a DOHC 4.0-litre twin turbo V8 engine, with 577 horsepower pushing it to a top speed of 198 mph, this is a car capable of redefining the brand for a young, daring and thrill-seeking audience in the 21st century. Powerful, beautiful and sure to become absolutely iconic, this is what happens when luxury meets unbridled power. 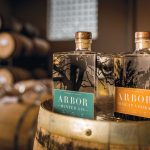