The worlds of food and high fashion aren’t as far apart as they might at first seem. While visitors to the top-end fashion shows of London, New York, and Milan may find little to snack on besides from fancy bags of artisanal popcorn, you’ve only got to flick through some of the more successful lifestyle pages of magazines – and, of course, on Instagram – to see that fine dining is very much en vogue right now.

It’s this coming together of the catwalk and the kitchen that has doubtlessly inspired the opening of Gucci Osteria, the peerless fashion brand’s first attempt at a genuine sit-down dining experience. Launched on the 11th of January to a flurry of excitement and interest, the restaurant is based in stunning surroundings; the historic Palazzo della Mercanzia in Florence. Here, diners can luxuriate in a truly beautiful setting, and (literally) gain a taste of Gucci’s latest ambitions and ever-evolving sense of style.

The Gucci Osteria is the newest addition to the Gucci Garden, an immersive museum dedicated to the label, and one which pulls in fashion-conscious tourists hoping for an insight into what makes this brand so distinctive and revered. The restaurant is set to serve brand acolytes and curious passers-by lunch and dinner between 12 pm and 8:30 pm daily, with a somewhat unexpected menu overseen by celebrated Michelin Star chef, Massimo Bottura.

Bottura is perhaps best known for his three Michelin starred (the highest accolade the guide awards) restaurant, Osteria Francescana, which is based in Modena. That particular eatery is something of a mecca for those wishing to explore the latest innovations and horizons in Italian cuisine… and to the casual observer, it’s fair to say that the Gucci Osteria is quite a dramatic departure from such lofty heights of gastronomy.

Unlike that of Osteria Francescana, the Gucci menu heavily features tried-and-tested homely Italian classics; cheese tortellini, mushroom risotto, cacio e pepe and other local specialties. It also plays with international cuisine; there’s Bottura’s take on hot dogs and hamburgers and spicy Chinese pork belly buns. Despite the apparent differences between his two osterias, Bottura claims they have more in common than one might expect. Both restaurants, the chef claims, emphasize the importance of local ingredients cooked with sensitivity and a respect for natural flavors.

Gucci themselves have been keen to clearly put across the concept for their restaurant. In recent press releases, they’ve claimed that the menu at Gucci Osteria will include a mixture of iconic Italian dishes – reflecting the brand’s deep connection with northern Italy fashion – as well as conceptual reimaginings of classics, which mirrors the ethos of the label and the ‘spirit of reinvention’.

By bagging Bottura as their menu designer, Gucci have managed to tap into the current fascination for the highest echelons of gastronomy, while repackaging it into something which perfectly suits the overall experience that is the Gucci Garden.

This approach is reflected most starkly in the price of the menu at Gucci Osteria. One might expect to have to shell out a small fortune to be able to eat at such a restaurant, but in fact, the opposite appears to be true. Indeed, no single item on the brand-new Gucci menu costs more than 30 euros, making it a surprisingly affordable dining experience. The wine list, likewise, is dominated by local produce and is also more reasonably priced than one might anticipate.

It would seem that the reason for this unexpected affordability (Gucci is, after all, not exactly renowned for being by any means cheap) comes down to the raison d’être of the Osteria and the Gucci Garden as a whole. With its 8 euro ticket price and gift shop selling branded plates, mugs, and other household items, this is very much set up as a high fashion tourist experience – a sort of Disneyland for lovers of haute-couture. The diners and visitors to both the museum and the restaurant are there to take a glimpse into the world of the brand, to lift the velvet curtain and peek at what lies beneath… and not necessarily to walk away with a handbag costing the equivalent of a new sports car.

Once the plates are cleared and the last of the wine has been drunk, diners can wander out of the restaurant and explore the rest of the exhibition space. This includes a cinema room (showing concept films and promotions associated with Gucci’s history) and a market-style boutique where visitors can browse an extensive range of branded one-off items. Next, there’s the ‘Guccification’ room; a museum-style exhibition which explores the brand in considerable depth, showing how the label has transformed throughout its history and dominated the world of high fashion in more recent decades.

While Gucci Osteria might not be for everyone and is certainly considerably more accessible than anything else associated with this brand, it’s clearly part of a growing trend.

Several high-end fashion labels have begun flirting with the world of food, and very much have their fingers on the pulse of the contemporary – and deeply style-conscious – foodie scene. Tiffany & Co. recently launched The Blue Box Cafe in New York, Prada have their own patisserie in Milan, and LVMH are opening another of their ‘La Grande Epicerie’ food outlets in the near future. As the public’s appetite for luxury and distinction continues to grow, who’s to say what will come next? 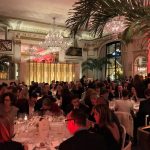