[vc_row][vc_column][vc_column_text]Think all Tequila is made the same way? Think again. A tahona is a traditional volcanic stone rig that’s used to crush cooked agave piñas, preparing them for fermentation and then distillation. As opposed to efficient, modern roller mills, a tahona is essentially just a massive stone mortar and pestle, producing a vintage style of Tequila packed with flavor thanks to its old school origins.[/vc_column_text][/vc_column][/vc_row][vc_row css=”.vc_custom_1495613645899{background-color: #f2f2f2 !important;}”][vc_column][vc_column_text css=”.vc_custom_1495613568314{background-color: #f2f2f2 !important;}”]

In Spanish tahona has a double meaning. Commonly the word means mill or mill house but in Mexico a tahona can also refer to a large stone wheel that is used to crush the roasted hearts of agave known as piñas into a fermentable mash. The tohana is usually pulled by a donkey but also horses and oxen can provide the labor. In contemporary times palenques often use tractors whereas more remote palenques have a tahona made out of wood. (Source)

[/vc_column_text][/vc_column][/vc_row][vc_row][vc_column][vc_column_text]Tahona production is still common with small mezcal producers, as it’s always the way it’s been done in Mexico, stretching back to the 1500s. However, the same can’t be said for Tequila. In fact, the massive growth of Tequila in the 20th century was in large part thanks to its efficiency and ease of production.

One way that was accomplished was with the roller mill, which rapidly shreds and rolls cooked agave, extracting all the liquid and sugars necessary for fermentation. The tahona quickly fell out of favor with most distilleries in the wake of this technology. Why stick by a painstakingly slow process when you could exponentially increase efficiency, production and profitability when higher tech improvements are available?

To get a sense of that, consider that in Mexico today there are approximately 140 licenses for Tequila distilleries, with about 75 actually open and operational. Of those, approximately half a dozen incorporate tahona into their production. Some are smaller producers, and some use the tahona only sparingly, leaving Patrón as by far the biggest of the bunch in regards to both overall size and how much they use tahona production.

We never change our processes, only replicate.

Patrón isn’t just the big boy trying to capitalize on the positive attention of buzzy words such as “old school” or “vintage” though. They have used tahona with their production from the brand’s founding, and have continued with the exact same means of production along the way since.

So it is that Patrón uses six ovens to cook agave for the tahona portion of their production, each with a 14-ton capacity. Every oven gets two tahonas, splitting the cooked agave into equal batches for crushing and maceration. Similarly, the distillery also showcases dozens of small, equal copper pot stills toiling away, rather than a handful of larger ones.

Patrón’s core releases are each a blend of tahona and roller mill Tequila. Meanwhile, their Roca Patrón lineup, launched in 2014 and including a Silver, Reposado, and Añejo, are entirely tahona-made, as is their Gran Patrón Piedra expression.

So how does tahona Tequila get made? The tahona itself is the massive stone that does the crushing, moving around its circular rock ring enclosure, known as the trapiche. At Patrón, each two-ton tahona is made with volcanic rock from Jalisco.

The tahonas are rolled around the trapiche starting from the center and moving outward via a motorized rig. If you’re saying—hey, that’s cheating, where’s the horse?—just imagine the chaos added to the mix with a dozen horses hanging out in a massive distillery.

Not to mention a few other important reasons for this one indulgence to modern technology. “It’s pretty much the same, just cleaner and safer,” Mariana Sánchez Benítez, production supervisor at Patrón. The point is the stone-crushing, not the horse-pulling, even if the latter makes for a better photo op.

Even with a motorized rig in place of horses though, tahona production is still far less efficient than roller mill. “It’s a very, very slow maceration process,” says Benítez. Each tahona takes roughly 3.5 hours for a seven-ton batch, whereas the typical process could churn through 16 tons in an hour. “But it’s the most traditional way to macerate the agave.”

The differences in tahona production extend beyond the crushing and maceration though. “It’s not just crushing the agave, the magic of this process comes next,” says Soltero.

What he’s referring to is that the crushed agave fiber is actually kept with the liquid for the resulting fermentation process. During this stage, carbon dioxide being released pushes all of the agave fiber to the top of the fermenter, creating a cap of sorts above the bubbling liquid. This strange looking, tangled mound of orange-brown fiber is useful for helping to trap desirable flavors and compounds in the liquid to be distilled. The fibers are then even kept in with the liquid for the first distillation as well.

All of this effort, and all of these added steps, does it offer anything beyond a good story, and those buzzy words? Absolutely.

“It will contribute to a smoother and sweeter Tequila,” says Benítez

The flavor profile of a tahona-produced Tequila is far different from one produced with a modern roller mill. Key is that the sugars are extracted from the fibers differently with the tahona, and that the fibers then go along for the ride all the way from fermentation to distillation, as described above.

Side by side at the distillery, the tahona Tequila was round and agave-forward, with more of an earthy and vegetal influence, whereas the roller mill produced Tequila was sharper, with citrus, vanilla, and lavender.

Which one you prefer is simply a matter of personal preference, and it’s easy to see how a blend of the two offers desirable traits from both realms. If I had to choose though, I’ll take the tahona juice. 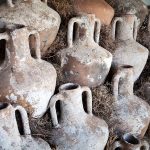