Scotch is a Whisky – not a Whiskey.

Scotch is a Whisky (they don’t spell it with an “e”) that is made only in Scotland and which is distilled from grain, generally malted barley. Usually, but not always, it will have the aroma of smoke, which comes from the peat that once was the sole source of drying the malted barley. After that, how you make Scotch — and how you drink it — has many variations. Let’s start with the basic definitions as given by the Scotch Whisky Association (SWA) and then expand on them. No need to memorize, just use this as a reference.

The first was abundant grain, with barley being the grain of choice and already grown for both bread making and livestock feed. Second was plenty of pure water for both distillation and, later, to moderate the amount of alcohol in the spirit. Third as peat, a spongy biomass that lays on the surface of some areas — or just under it — and which, when dried, can be burned for fuel. All that was needed was a still.

The best known, and highest-priced, Whiskies are made from malt. Malt is formed by soaking barley in water then spreading it on a surface to germinate. Once this occurs, the germination is stopped and the malt dried by the application of heat, traditionally from smoky peat. This mixture is ground and mixed with hot water to form a sugary liquid that is allowed to ferment. Finally, this liquid is distilled in copper pot stills at least twice, with the heart of this distillation retained as raw Scotch.

“Blending is an art,” says Director of Specialty Spirits for Frederick Wildman Tim Master, “which allows for different nuances in the way Scotch tastes.”

Our challenge was to hold off.

For example, Master is in charge of sales for The Feathery, a high-end blended malt Whisky that comes from only three single malts and is aged 8 to 10 years, as well as Pig’s Nose, which is a less expensive blend of malt and grain Scotches.

Ewan Morgan is head of Scotch Education for Diageo Reserve, which also makes a popular blended Scotch, and explains: “Johnnie Walker has always been about creating Whiskies that anyone can drink, as they have a style that suits any palate — from the ever powerful and rich smoke of Double Black to the delicate but rich and creamy flavors of Johnnie Walker 18-year-old.”

By contrast, single malts have the distinctive tastes of their home distillery. A couple of years ago, Alan Winchester, the master distiller at Glenlivet, launched a 50-year-old single-barrel, single malt “vintage” Scotch that had been made by his predecessor, George Smith. There were 100 bottles produced that each sold for more than $20,000.

“The only challenge was in keeping [the 1964 barrel] for 50 years,” Winchester said. “There will always be people who want a 20- or 30-year-old vintage. Our challenge was to hold off and to realize that the wait would be worth it. And it is.”[/vc_column_text][/vc_column_inner][vc_column_inner width=”1/4″][/vc_column_inner][/vc_row_inner][/vc_column][/vc_row][vc_row full_width=”stretch_row_content_no_spaces”][vc_column][vc_gallery interval=”0″ images=”13041″ img_size=”full” onclick=”” css_animation=”fadeIn” title=”A View of Glenlivet”][/vc_column][/vc_row][vc_row full_width=”stretch_row_content”][vc_column][vc_row_inner][vc_column_inner width=”1/4″][/vc_column_inner][vc_column_inner width=”1/2″][vc_column_text]In addition to the type of Scotch, one must also consider its origins: Highlands, Lowlands, Speyside, or the Islands. Lowland Scotches are those gathered largely around Glasgow, south of the mountains. Often these are lighter in peat flavors or made without peat. Highland Scotch distilleries are those located mostly on the north-facing mountain slopes, while Speyside distilleries are those along the River Spey and its tributaries as they flow north. The Highlands and Speyside are where most Scotches originate, whether blends or single malts. The Island Whiskies come from a part of the Hebrides chain off Scotland’s West Coast. Prominent among these is Islay, whose Scotches contain the peatiest or smokiest aromas and flavors. The more phenol — a compound found in the tar wood — in the peat, the smokier the aroma.

“We specify a minimum phenol level in the malt of less than 35 parts per million, generally received here at 40 to 50 ppm,” says Gordon Bruce, master distiller at anCnoc, a Speyside producer. “The phenol level varies greatly from load to load, very much down to how much peat smoke the maltster can get into the kiln when the moisture level of the green malt is high. The ability for phenol to absorb or adhere decreases as the malt dries.”

There are six different Scotches made by anCnoc, defined according to the phenol levels. Like many distilleries, anCnoc no longer makes its own malts.

Another factor is how long the Scotch is aged in the barrel before bottling, which can be a blend of various ages that gives an average. For example, a 15-year-old Scotch would be considered in most cases to be of a premium age. There is a trend to exclude ages from some labels and instead emphasize a special brand within the company that makes the Scotch. These are often called NAS [no-age statement] Scotches.

Neat, on the rocks, or with a splash.

Finally, a Scotch is usually about 80 proof (or 40 percent alcohol). This strength is reached by adding water, but, with some Scotches, no water is added, making for more-potent Whiskies. These are referred to as “cask strength” and may reach 130 proof (65 percent alcohol).

While there is a trend today to enjoy Scotch as part of a cocktail, there remains a hard core of Scotch lovers who prefer to drink Scotch “neat” (no water or ice), “on the rocks” (ice but no water), or “with a splash” (a little water). Scotch aficionados often add a drop or more of water to a neat Scotch to better “nose” it, soaking in the aromas and later the flavors unleashed by this addition of H2O.

On reflection, we might just call this latter practice “water over the dram.” 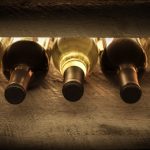 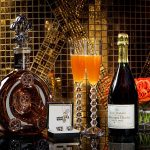