If you’re fortunate enough to have a week or two to spend in Tennessee (or if you live there), you’ll have no trouble earning every single stamp in the Tennessee Whiskey Trail Passport. This handy little guide, with space for tasting notes, separates 26 Tennessee distilleries, large and small, into three regions so you can easily map out a trip of any length. You can also download the Tennessee Whiskey Trail App and check in at each location. Once your passport is fully stamped, just register it at TNWhiskeyTrail.com and score a free T-shirt.

If you don’t have a much time to spare, however, we’ve got you covered—we’ve planned an itinerary of six favorite stops in the Middle Tennessee Region (around Nashville) that can be completed in just two days. Our route includes three stops in downtown Nashville and three in other locations south of the city.

Pick up your passport at any stop along the route, and don’t forget to get it stamped at each place

In 2006, a trip to the butcher in Greenbrier, Tennessee, changed Andy and Charlie Nelson’s lives forever. They were driving north from Nashville with their father, Bill, who was telling them stories along the way about a long-ago family Whiskey business that had been in Greenbrier. The butcher, Chuck, knew all about it, too. He pointed the Nelsons across the road to an old warehouse that had belonged to the distillery, and then he suggested that they visit the Greenbrier Historical Society. The curator there had a big surprise for the Nelsons—two original bottles of Nelson’s Green Brier Tennessee Whiskey from the early 1900s.

Andy and Charlie weren’t just intrigued, they were obsessed

In 2009, after three years of research and planning, they re-formed the business started by their great-great-great grandfather, exactly 100 years after it had closed during Prohibition, this time basing the business in Nashville rather than Greenbrier. Whiskey selections include Nelson’s First 108 Tennessee Whiskey-based on the old family recipe—plus White Whiskey. There’s also five varieties of Belle Meade Bourbon: Straight, Single Barrel, and Sherry-, Cognac-, and Madeira-aged. The tasting room is roomy and warm, and there’s a lovely gift shop with apparel, barware, and gifts.

In March 2016, scientist Bruce Boeko stepped out of the DNA laboratory and put his scientific knowledge to use in his new venture, Nashville Craft Distillery. At this bright and welcoming location, he crafts unique small-batch concoctions in his 250-gallon still—like Nashville Honey, a spicy-and-sweet liqueur infused with cinnamon, ginger, cardamom, and lemon peel. He also makes Naked Biscuit, a sorghum spirit that uses only Tennessee sorghum syrup, and Crane City Gin, made completely from scratch. As he works on perfecting a traditional whiskey, scheduled for release later this year, he shares space in his distillery with the owners of Fugitives Spirits and helps them craft their three special Whiskeys, including Tennessee Waltz, featuring hints of chocolate, fig, and caramel.

Darek Bell and Andrew Webber, friends since childhood, used to make beer and wine in Darek’s garage. Then one day, in a fit of frustration over a homebrew process that wasn’t working quite right, Andrew jokingly remarked that making Whiskey would be much more satisfying… and the rest is history. After a few years of studying spirits and touring other distilleries, the friends opened Corsair Distillery in Bowling Green, Kentucky, in 2008, then the Nashville location in 2010. They proudly call their award-winning spirits “hand-crafted, small-batch, ultra-premium booze for badasses,” and over the years they’ve offered a little of everything, from Artisan Gin and Spiced Rum to Red Absinthe and Pumpkin Spice Moonshine. During the informative tour, if you hear purring, don’t worry; that’s just one of the friendly resident cats, begging to be pet.

Heath Clark was busy with his thriving law career when one day his boss made a somewhat funny offhand comment: “You sure talk about Whiskey a lot.” That was all Heath needed to realize he was in the wrong profession, so after “getting permission from God and everyone” (including his wife), he traded in his briefcase for a still and started making craft spirits at his new micro-batch distillery.

As he carefully prepares his one barrel a week (compared to about 2,400 barrels per day at Jack Daniel’s, he says), Heath is proud to be honing “a craft that emanates from the region of the country I call home.” He makes just four spirits—Tennessee Dry Gin, New Whiskey, Tennessee Black & Tan, and Tennessee Bourbon—and he’ll pour them for you personally at the rustic, five-seater bar. The main ingredient his spirits all share, he explains, is patience. “If you’re going to be small, you’d better be good.”

Leiper’s Fork Distillery sits on 27 lush, rolling acres near the historic village of Leiper’s Fork, so every visit is like a little getaway. The retail store and cozy tasting room are housed in a 200-year-old log cabin, which is pretty cool, but Ginger is really the star of the show—she’s the handmade, 500-gallon copper still that proprietor and distiller Lee Kennedy and the rest of the staff are so proud of. All of the tour guides really know their stuff, but “Pops” is a fan favorite; he’s the very knowledgeable, quite talkative fellow in denim overalls. Lee and his crew make Old Natchez Trace White Whiskey, Hunter’s Select Barrel Tennessee Bourbon Whiskey, plus Bourbon and Whiskey under the flagship Leiper’s Fork Distillery brand.

The folks at George Dickel know they’re not quite as large-scale of an operation as Jack’s place about 18 miles away in Lynchburg, but they’re pretty proud of being the second-largest producer of Tennessee Whisky (no “e,” please, they insist, following in the Scottish tradition). Cascade Hollow is a little hard to find, so don’t be afraid to ask for directions in the tiny town of Normandy, just before you turn east onto Cascade Hollow Road.

Once you’ve arrived, though, you’ll see that it was worth the effort

The engaging, one-hour tour leads you through the fully operational distillery and barrelhouse, then deposits you back at the tasting room, where you can sample White Corn Whisky, Classic No. 8 Whisky, Superior No. 12 Whisky, Rye Whisky, and Barrel Select. The huge (yet quaint) retail store is a must; you’ll find hats, shirts, barware, books, gifts, and a friendly staff that’s anxious to share even more fascinating George Dickel facts if they’re not too busy. 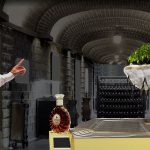