BROOKLYN, NEW YORK – Mom, baseball, and apple pie might be what some people think of when they think of America. But when it comes to food and restaurants, there’s frankly nothing more American than a steakhouse (or steak house, as some people like to call them). 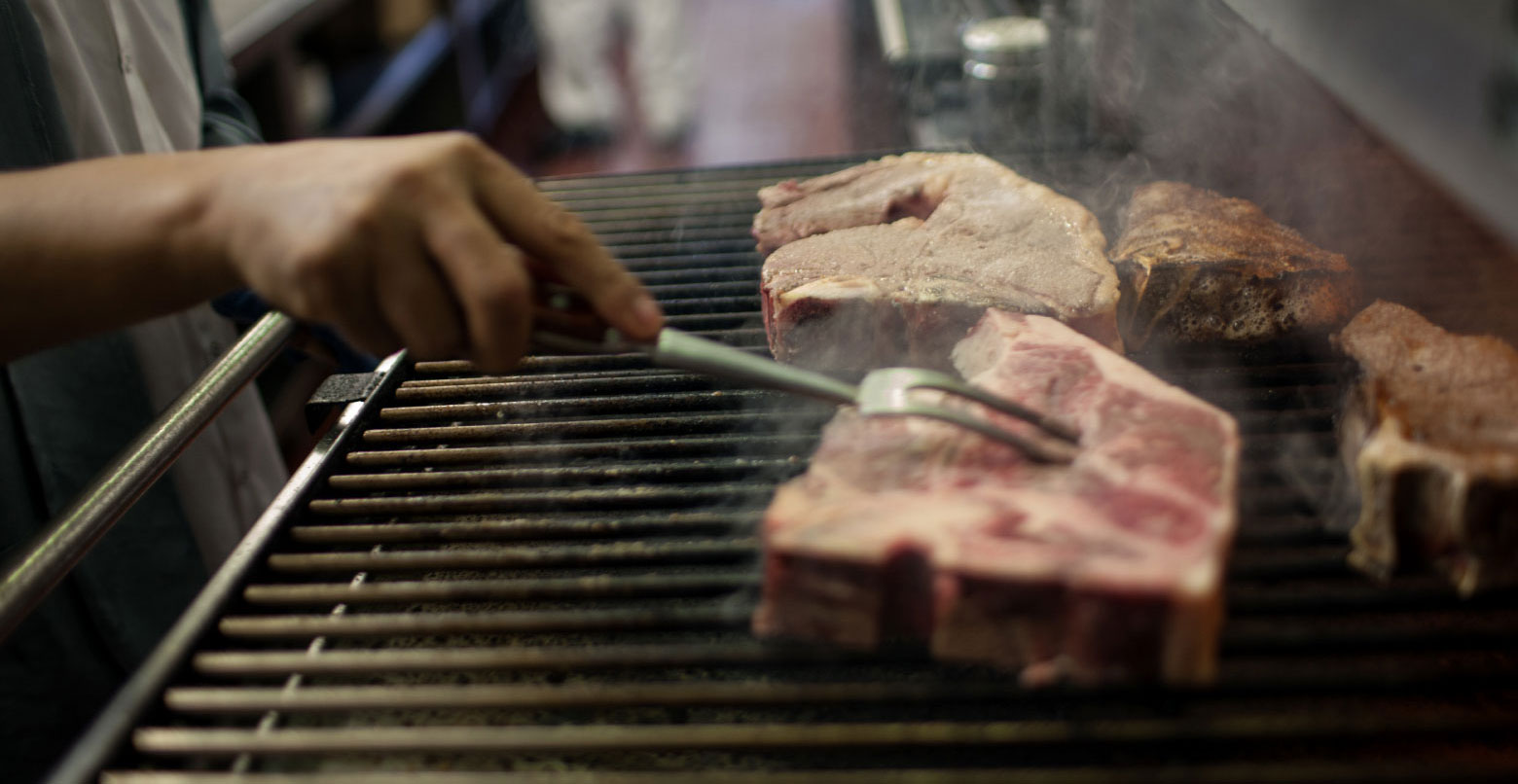 These bastions of a bygone era often conjure up images of men in white shirts and dark suits with Martinis or Manhattans in one hand and a cigarette in the other while they eat a sizzling-hot steak the size of a Cadillac hubcap in a dimly lit wood-paneled room. The more modern one’s often have a freezer with a glass door near the entrance with slabs of beef hanging on racks.

Such restaurants might seem like relics of the past. But like a well-made cocktail or a neatly pressed shirt, some classics never go out of style. And that’s certainly true when it comes to some of the world’s best, classic steakhouses.

Like endless debates over who’s the greatest baseball player of all time (Babe Ruth) or the greatest football player (Pelé), many steak lovers have their personal favorites. But nearly everyone will agree that one steakhouse routinely manages to make its way into many of these discussions—Peter Luger Steak House in Brooklyn, New York. For the rest, there is no need to debate—Peter Luger is simply the best.

Steakhouses have been around probably since prehistoric men first cooked meat over an open fire in a cave. But the American steakhouse as we know it evolved from “chophouses” (which featured “chops” or “cuts” of meat) in England starting in the 1600s. Steakhouses flourished in England particularly throughout the 19th century, when they also became extremely popular in the United States. 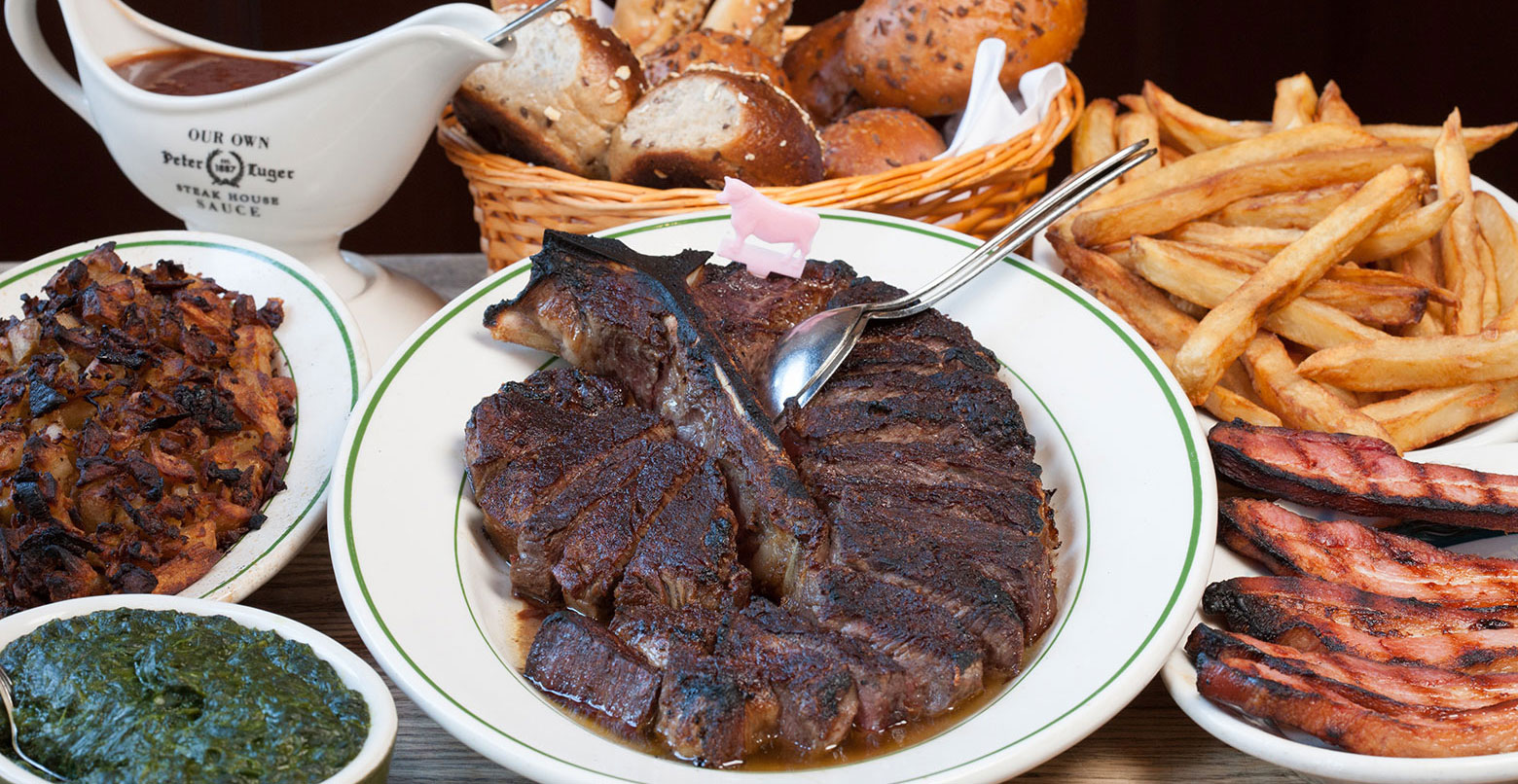 Why did steakhouses become so popular in the United States at that time? Several factors probably came into play. America’s expanding railroad network made it easier to transport meat from slaughterhouses to steakhouses. And thanks to the Industrial Revolution, an increasing number of people had the money and the time to eat a large slab of beef. I also suspect that the caveman appeal of steak never really went out of style.

As any self-respecting carnivore knows, not all cuts of beef are the same. Certain ones sell for far more than other parts of the cow. In general, the more tender the beef, the more valued the cut. Some of the most popular cuts of steak include:

Beef Tenderloin – Beef cut from the loin (part between the spine and the ribs) part of a cow next to the backbone.

Flank Steak – Meat cut from the lower half of a cow from the abdominal area.

Filet Mignon –  Steak cut from the small end of the tenderloin muscle below the ribcage.

Porterhouse Steak – Another name for a T-bone steak cut from the sirloin part of a cow with the bone attached to the meat.

Ribeye Steak – Meat cut from the rib section of a cow and which often has marbled fat. Sometimes served with the bone and referred to as a “Bone-In Ribeye Steak.”

Strip Steak – Particularly tender steak cut from the short loin (or sirloin) part of a cow.

T-Bone Steak – Meat cut from the sirloin (or short loin) part of a cow with a T-bone-shaped bone attached to the meat.

Top Sirloin Steak – Meat cut from sirloin part of a cow with the bone removed. Also sometimes referred to as a “New York Sirloin.”

Peter Luger Steak House was originally named Carl Luger’s Café, Billiards and Bowling Alley. Peter Luger was just 21 years old when he opened the restaurant with his nephew Carl, who was the head chef, according to the restaurant’s website. 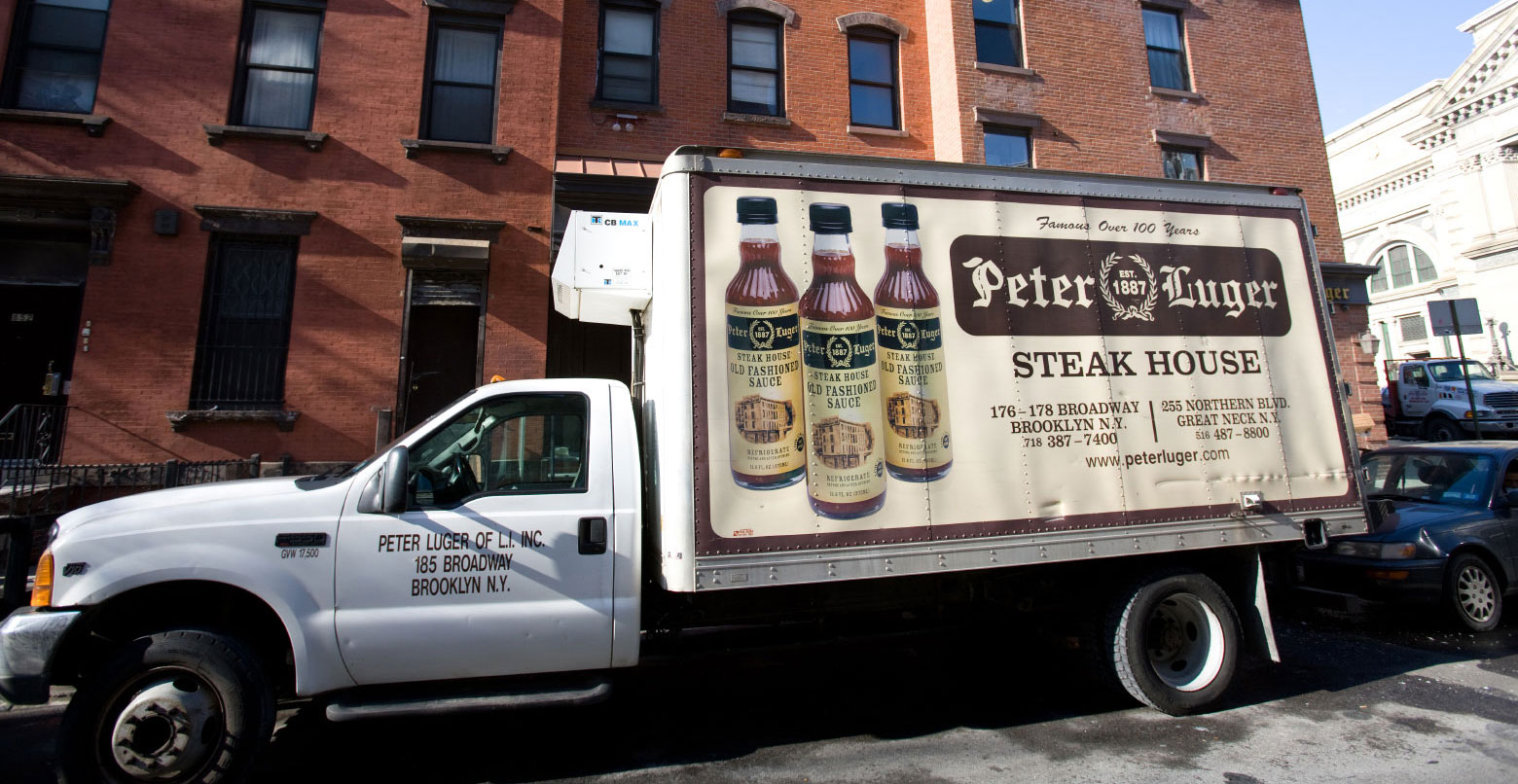 “If a customer complained about a steak, he [Peter Luger] would taste it and often refuse to replace it,” stated Forman’s obituary.

Forman ran Forman Family, a factory across the street from Peter Luger Steak House that “made everything from silverware to trays to stamped-metal giftware,” according to the Peter Luger website. 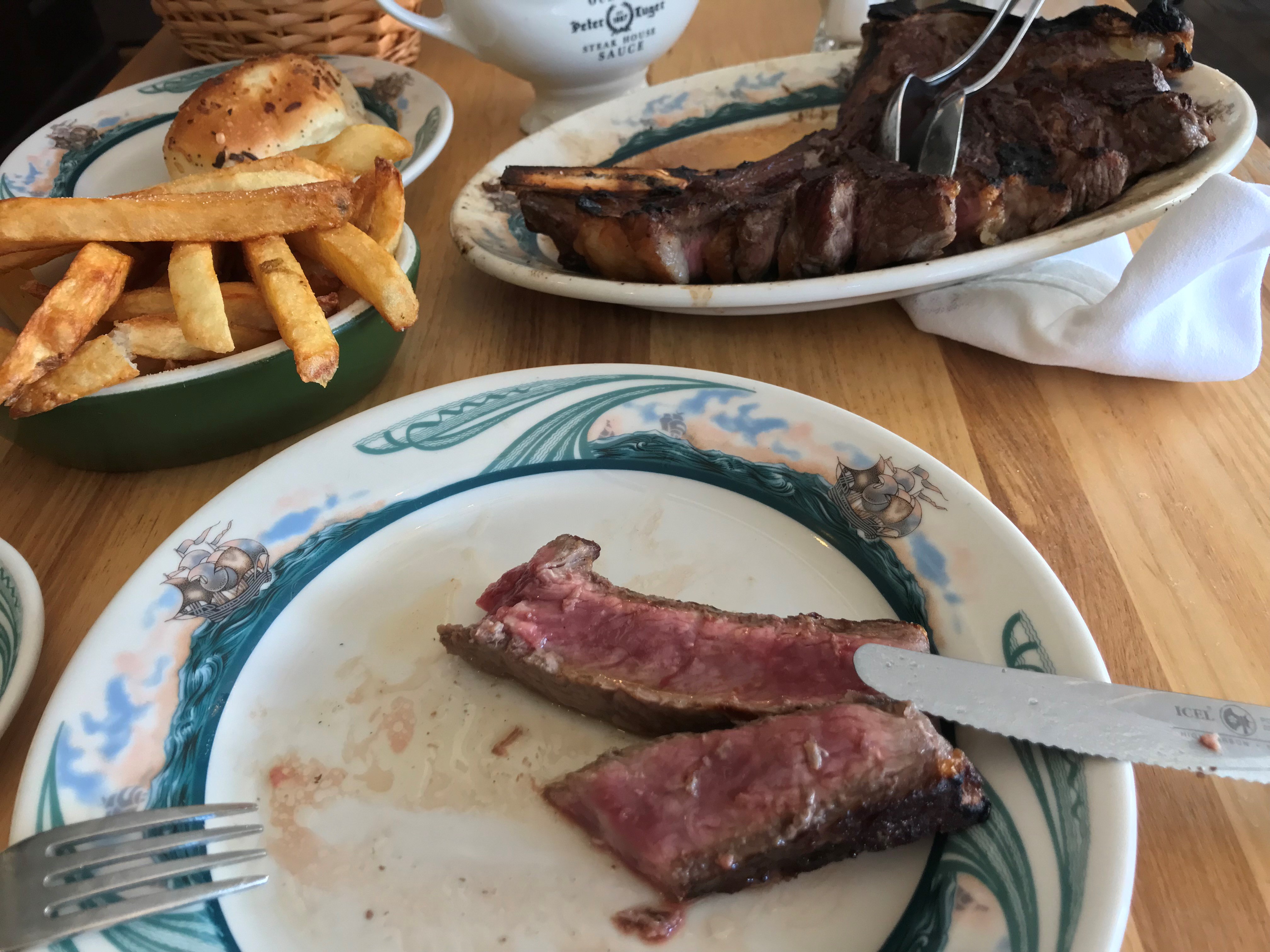 Forman restored a sense of order to the restaurant. He bought a scale for the restaurant, so deliveries could be more precisely weighed, according to his obituary. And his wife, Marsha Forman, spent two years learning how to select the best meat from wholesale butchers. The meat is then dry aged on site at the two Peter Luger restaurants.

But more than anything, probably the best thing Forman did was to leave much of Peter Luger Steak House largely unchanged during the five decades he owned and ran the restaurant. Forman died in November 2001. He was 98 years old.

As you would expect at a steakhouse, there’s an extensive list of hearty red wines on the menu at Peter Luger’s. Italian, French, and Spanish red wines dominate the list, along with an extensive selection of California Cabernet Sauvignons. Many of the wines are reasonably priced for New York City in the $60 to $200 range. 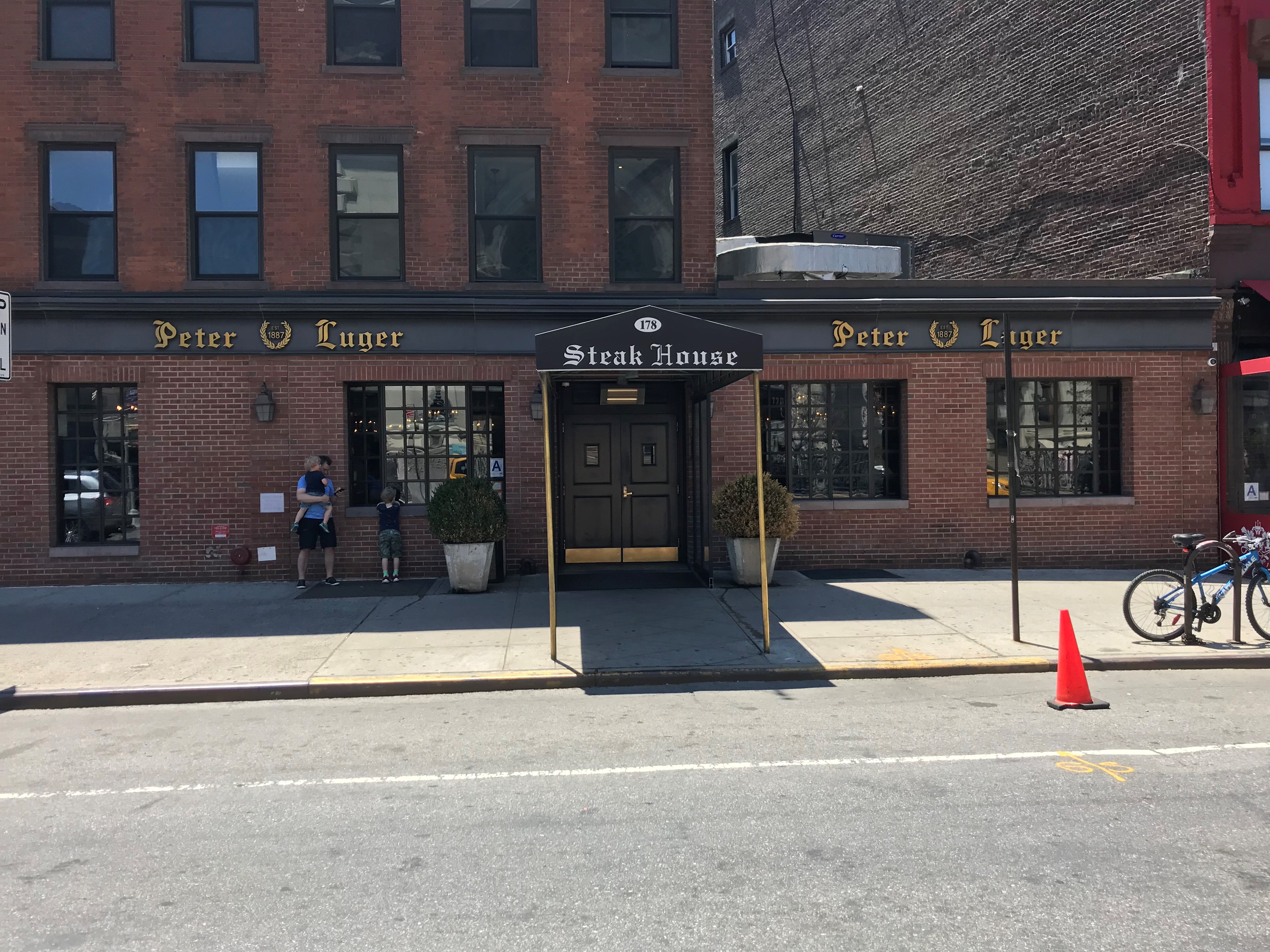 But for many steak lovers, all they need is a well-made cocktail to go with their perfectly prepared steak. And you can find great, bone-dry Martinis and mouthwatering Manhattans at Peter Luger Steak House.

Some steakhouses have kept pace with the times. They have sleek, modern surroundings. Peter Luger Steak House feels like a restaurant gloriously frozen in time. Simple wooden chairs. No background music piped into the dining room. And the waiters wear outfits appropriate for such no-nonsense surroundings—black pants, white shirts, white aprons, and black bow ties.

If you’re not sure which steak to order, get the rib steak, which is a bone-in ribeye. The meat arrives sizzling on a white, oval-shaped plate. Suddenly, you realize why there’s no music and few distractions in the restaurant. All your senses—especially smell, sight, and sound—are drawn toward the slightly seared meat in front of you. 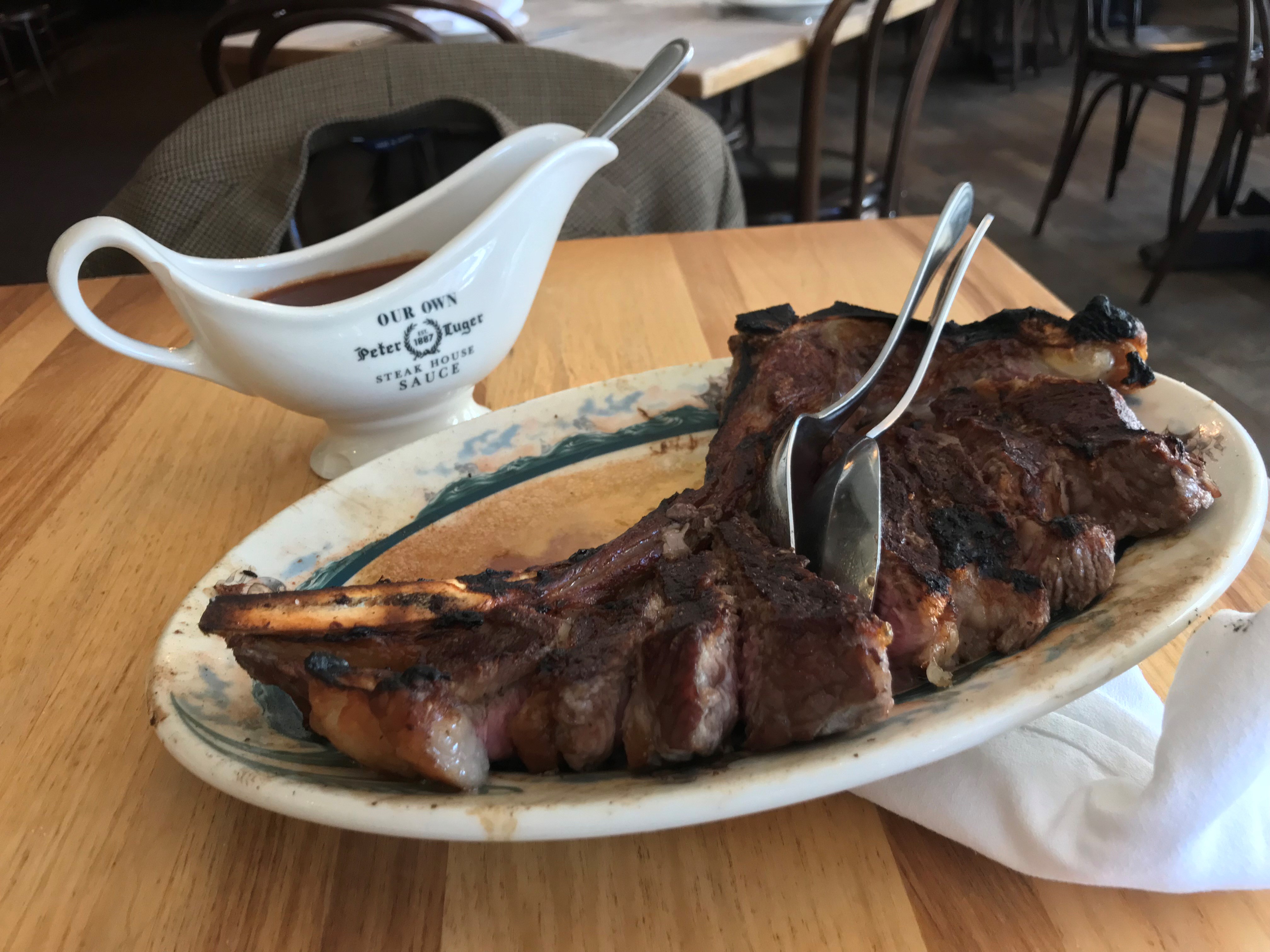 The steak comes with Peter Luger Steak House sauce in a white, porcelain dish. But don’t put too much of the cocktail-like sauce on your steak. Simply pour the drippings from the meat onto the meat itself. Steak this great frankly doesn’t need anything else.

You also almost don’t even need a steak knife. The meat practically melts as you cut through a piece. And when you take a bite, be prepared to taste some of the softest, silkiest meat you have ever had in your life.

And as you look up in a haze of wonder from each magical mouthful, you suddenly realize everyone else in the dark, wood-paneled dining room has the same glassy eyed look. Everyone’s smiling. Everyone’s savoring each bite. Steak makes people happy. And everyone’s in ecstasy at Peter Luger. 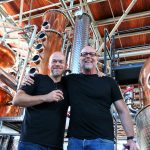