Whether you want a premium cigar or just hope to share a smoke with a politician, for 130 years W. Curtis Draper (Drapers) has served all manner of patrons in downtown Washington, D.C., including messengers and civil servants, executives, ambassadors, and occupants of the White House. You will find the best cigars and an aesthetically pleasing cigar store at their location close to the presidential mansion, or, visit the Friendship Heights location for their cigar lounge concept, Civil Cigar Lounge.

Founded in 1887 by William Curtis Draper, Drapers is the oldest full-service tobacconist in the District of Columbia and the third oldest in the United States. Proprietors John Anderson and Matt Krimm offer a full array of cigars, pipes, pipe tobacco, snus, and smoking accessories (lighters, ashtrays, cutters, punches, etc.) to a national clientele. Old Liquors Magazine sat down with Matt Krimm to learn more.

From small boutique manufacturers to some of the largest.

The cigar enthusiast considers cigar smoking as not only a hobby but also a lifestyle. W. Curtis Draper Tobacconist caters to this lifestyle with the best cigars and a luxurious environment in which to enjoy them. The shop has been in its current location for six years, across the street from the Treasury and the White House. The proprietors strive to create an interesting product mix for their customers, which means they have something to offer everyone. The clientele is diverse, so they believe the selection must be as well.

Variety is key. W. Curtis Draper carries cigars from small boutique manufacturers to some of the largest manufacturers on the market. The shop features cabinet service as well as a walk-in humidor. Krimm says they made this decision because some people like the interaction with the staff in terms of asking questions about different blends, and some people just like to look in a humidor on their own. They also integrated three separate seating areas into the store, allowing customers an area to talk, watch television, or get some work done in a quiet corner. Krimm says that each area has its own vibe within the store.

Krimm says, “We get to know them personally, as well as what each one is looking for in a cigar. We know many of the regulars as friends as well as customers, so suggesting something or alerting them to a new cigar that fits into their profile is easy, and they trust us.”

The proprietors believe in connecting with new customers over a cigar to learn more about how they found the store, what they are doing in town, and finding out what they have liked in the past. “Engaging a customer will lead to the best service,” Krimm says.

In addition to top-tier customer service, W. Curtis Draper also hosts a monthly “First Friday” event. The proprietors work with a manufacturer to come in and offer specials and deals on particular products, and will typically have a raffle and tasting of some sort. The “First Friday” event started about 15 years ago as a way to get people into the store and present a charity with funds from their charity event, the “Little Puff.”

“’First Fridays’ has since morphed into a monthly gathering attended by some of the biggest names in the business: Litto Gomez, George Padron, Pete Johnson, Nestor Miranda, and Jonathan Drew to name a few. We do a ‘Coffee Break’ promotion on the 15th of each month featuring our cigar of the month. This month is Winston Churchill Robusto. Customers come in from 11:00 a.m.–2:00 p.m. and purchase the cigar of the month, and get a free cup of coffee from a local roaster,” Krimm says.

We wanted to take the stuffiness out of it and make it fun, entertaining, and educational all at once.

At Civil Cigar Lounge, their lounge concept in Friendship Heights, D.C., they do “Friday Night Lights,” a once-a-month event featuring a cigar and spirits pairing. The event started about three years ago as a sort of Cigar and Spirits 101. The bar has 350-plus Whiskeys and more than 225 cigars. Krimm says it can be intimidating to many people to walk in and see that large of a selection, so they wanted to do a fun series that shows new customers what to look for in a cigar and spirit, so they can start to pair items on their own.

“We wanted to take the stuffiness out of it and make it fun, entertaining, and educational all at once,” Krimm says.

​A Good Cigar and a Story

Any cigar store in business for 130 years is sure to have some stories to tell. Especially when they are located near the White House.

But Krimm won’t tell all. Because discretion is one aspect of their customer service, he says there are many other stories, but, “D.C. is such a conservative town and people like to do their own thing. We respect their privacy and want them to come in and relax in our store.”

Mild: Fratello Oro—Krimm says the Fratello Oro has a smoke that is creamy with a nice natural sweetness and just a light note of spice. He was surprised at how much he enjoyed this cigar and it is very reasonably priced at $8–$10.

Medium: MBombay Gaaja Toro—An interesting blend in this cigar that includes tobaccos from Peru and Paraguay. Krimm loved the smooth rich flavor. He says it was perfectly balanced with subtle sweetness and a Szechuan pepper spice. This quickly became one of Krimm’s go-to cigars. It is a little more expensive at $13–$17.

Full Bodied: Nat Sherman “Civil” Torpedo—This is a cigar available exclusively at Civil Cigar Lounge. This was a project W. Curtis Draper did two years ago with the Shermans. It is a large torpedo based on the 1930 blend, featuring a Dominican wrapper around a filler of Dominican and Nicaraguan tobaccos. It is full of flavor, but the spice has settled with age. It smokes full-bodied with notes of leather and cedar. This one is $13. 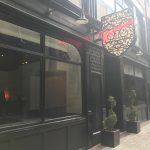