The next frontier of the fanciful craft cocktail is the ice—that rock or two—that sits, usually unassumingly, in the cocktail. While it’s still not all-too-common practice for much thought to go into the ice outside of clarity and a circular ice mold, incredible mini cocktail ice statues have popped up around the globe from some of the best bartenders we have.

From hand-cut diamonds to perfect spheres, the list of frozen creations goes on. The process behind a hand-crafted sphere getting into the glass in front of you is not simply the bartender grabbing any normal piece of ice and shaping it before you (as fascinating as that is in itself); rather, it is as fascinating as it is lengthy. Let’s take a look.

Ice, in the prestigious craft cocktail scene, is judged on everything from the more-obvious size and cut to the granular clarity and density.

Cut is difficult, of course, especially when done on the behind-the-bar stage, but that’s only on the end of the line. The clarity factor, and process behind it, leads many bars to order ice delivery on a daily basis to make sure that their ice is absolutely perfect.

Have you ever stopped to contemplate the ice inside your cocktail as you swirl your drink around it at your favorite bar? What does it look like?

What does it really look like? Even if one has stared down a cocktail, fewer will note the nature of the ice. Does it look a little cloudy in places? Are there bubbles? It’s not so much a thought of imperfection as it is variation in all ice. A spot here, a spot there. Or is it? The cocktail world may have an opinion on this.

You might have been lucky enough to, somewhere in nature or otherwise, see a formation of perfectly clear ice. It seems magical, almost, that the water can be that clear and freeze so solidly like a cube of heavy nothing but light refraction.

How this all works really boils down to freezing speed. Known as a lake effect, slow freezing lets bubbles rise up to the top of forming ice, instead of getting trapped inside of a quick freeze that envelops it. This results in denser, spotless ice, harder and colder than a normal, quick-frozen piece of ice.

Have you ever stopped to contemplate the ice inside your cocktail st you swirl your drink around it at your favorite bar? What does it look like? What does it really look like?

That said, this laborious, picky process is not completed for the finished aesthetics alone. All of these characteristics help to breathe consistency into the cocktail process, as there exists no variation from one airless cube to the next, and the density and temperature help the ice to dilute a drink at a slower pace.

Technology That Creates It

Of course, the popularity of this pristine ice across a vast spread of locations necessitates that we aren’t simply relying on shipping thousands of pounds of it in from the cold lakes in the colder nooks of the world—as we had long ago—to feed the bars the ice they need. A whole host of ice-making machines have been created just for this, in addition to serving as mechanical powerhouses for churning out perfect cubes (or spheres, or rectangles —you name it).

The Clinebell Equipment Company is a particularly big player in the cocktail ice scene, producing giant, flawless cubes of ice composed of up to 40 gallons apiece, and two at a time in the case of the CB300X2E model. After a three-day slow freeze from the bottom up, two 300-pound blocks are ready for heavy carving. For smaller endeavors there is the Kold-Draft, which creates 1,000 pounds of uniform 1.25-inch square cubes in just one day.

You might have been lucky enough to, somewhere, in nature or otherwise, see a piece of perfectly clear ice

For larger uses of scale without the room or budget for a $6,000 ice machine or the desire for instant access to a wide variety of options at once, there are companies like Just Ice, Inc. that make a multitude of ice options—including those with frozen flowers and other novelty accents inside each cube.

For those into the art of the craft and with the bandwidth, all it takes is some practice and perfection (and a very sharp blade). Of course, I say “all it takes” like it’s a proverbial walk in the park, but just like the fine art of stone carving, it takes the utmost patience and built-up skill. 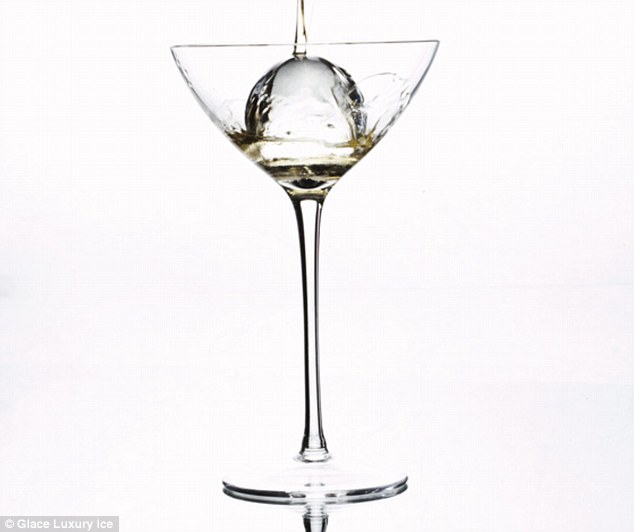 For some, like Hidetsugu Ueno out of the highly esteemed Bar High Five in Tokyo, Japan, the skill has been perfected from the focused, expert cutting of a large ice block into a diamond in two minutes flat with a few simple hand tools, creating a perfect fit for his serving glasses.

It seems magical, almost, that the water can be that clear and freeze so solidly like a cube of heavy nothing but light refraction

Overall, ice carving for cocktails is a more common practice in Japan, as is a quick but masterful crafting of a sphere in a few short minutes—which is truly in line with the combination of Japanese efficiency and hospitality, with some subtle showmanship of its craft cocktail bars.

Andrew Bohrer—a former master bartender, spirits writer, and artist, among other things—was a trailblazer of the concept in the western United States. With knowledge taken from a Japanese bartender at a global spirits competition, he returned to Bellevue, Washington, concentrated on the craft, and practiced regularly in his hometown, later spreading the practice on his guest appearances across the coast.