ISTANBUL – When the blue and gold Orient Express train used to pull into Sirkeci Terminal in the Golden Horn part of Istanbul, the place where many people used to go in this sprawling, cosmopolitan city that straddles the Bosphorus Strait (the waterway that separates Europe and Asia) was straight to the Pera Palace, a glittering, glamorous hotel built in 1892 by the Compagnie Internationale des Wagons-Lits primarily to house passengers from this famous train line.

The Pera Palace, a glittering, glamorous hotel built in 1892

“In the late 1800s, a gap in the market for luxury hotels in Istanbul was recognized,” said Ilgaz Şaşmaz, director of sales and marketing for the Pera Palace Hotel Jumeirah. “Passengers aboard the Orient Express, the preserve of the elite, desired somewhere of equal elegance at which to rest their heads upon reaching the last stop in the East from Paris. With this in mind, the Pera Palace Hotel was born. Establishment work began in 1892 and the grand opening ball was held in 1895.”

It was the first and only building to be powered by electricity, other than the Ottoman Palaces

The Orient Express as we know it stopped running from Paris to Istanbul in 1977. Since then, Istanbul has rapidly changed as well, blossoming into a modern metropolis and the largest city in Europe—over 14 million call Istanbul home. But the allure, attraction, and air of mystery surrounding the train and the Pera Palace lives on decades later, thanks partly to writers like Agatha Christie, who reportedly wrote one of her most famous Hercule Poirot mysteries, Murder on the Orient Express, in Room 411 at the Pera Palace.

Christie’s brilliant whodunnit has been adapted numerous times since its first publication in 1934, including an upcoming film adaptation directed by and starring Kenneth Branagh. And the Orient Express train line has been revived several times as well, including a luxurious, high-end version (operated by Venice Simplon-Orient-Express) with opulent, vintage train cars that takes six days to travel from Paris to Istanbul, including overnight stays in Budapest and Bucharest.

That’s why it should come as no surprise that the Pera Palace was named one of the “8 Best Hotels of the World” for book lovers in 2014. And next month, the hotel will host a crime fiction festival November 16–18 themed around James Bond in honor of Fleming, who stayed at the hotel in 1955 and set part of the James Bond novel From Russia With Love in Istanbul and aboard the Orient Express. The festival, officially called Black Week Istanbul, will feature best-selling British crime writer and James Bond continuation novelist Anthony Horowitz, who also created the popular British television mystery series Foyle’s War, and wrote many episodes of ITV’s Agatha Christie’s Poirot and Midsomer Murders.

But authors aren’t the only ones drawn to this iconic hotel. Winston Churchill, Greta Garbo, England’s King George V, and Zsa Zsa Gabor all stayed here. Gabor was even rumored to have had an affair with Mustafa Kemal Atatürk, the founder of the Republic of Turkey and another frequent guest at the Pera Palace. Atatürk often stayed in Room 101, which is now a museum in the hotel and which contains many of Atatürk’s personal belongings.

“Along with politicians, artists, and writers, kings, queens, and heads of state have also strolled along the halls of Pera Palace Hotel,” Şaşmaz said. “King Edward VIII, Queen Elizabeth II, Emperor Franz Joseph, as well as Sarah Bernhardt, Alfred Hitchcock, Pierre Loti, and Jacqueline Kennedy Onassis have all stayed, to name a few.”

Visiting the hotel, it’s easy to imagine these famous historical figures staying there. That’s because you can practically feel the ghosts of these luminaries and the air of mystery that seems to linger around every upholstered corner in this impeccable, five-star hotel. And thanks to a $29 million, two-year restoration of the hotel completed in 2010, there’s nothing faded or decrepit about this 125-year-old grand dame.

Along with politicians, artists, and writers, kings, queens, and heads of state have also strolled along the halls of Pera Palace Hotel

Alexander Vallaury, a French–Turkish architect living in the city in the 1800s, designed the hotel in a blend of neoclassical, art nouveau, and oriental styles, Şaşmaz said. Vallaury also designed a number of other iconic buildings in Istanbul, including the Ottoman Bank Headquarters and the Istanbul Archaeology Museums.

The longest established European hotel in Turkey, the Pera Palace “was groundbreaking in its technology,” Şaşmaz said. “It was the first and only building to be powered by electricity, other than the Ottoman Palaces. It was also the only address in the city to provide hot running water for its guests and was home to the first electric elevator in Istanbul.”

The stunning, original cast-iron and wood elevator remains in the hotel, which also features luxurious steam rooms, saunas, and an understated, indoor swimming pool. But no two rooms better capture the old-world grandeur of this grand hotel better than the iconic Kubbeli Saloon Tea Lounge and the opulent Orient Bar.

Everything about the Kubbeli Saloon feels luxurious

The soaring, high-domed Kubbeli Saloon greets you soon after you walk through the hotel’s main entrance. Everything about the Kubbeli Saloon feels luxurious and brilliantly combines the East-meets-West grandeur of the hotel—the old-fashioned chandeliers, the smoked-glass windows lining the walls, its velvet chairs and ornate, tiled walls and parquet floors. The Kubbeli Saloon serves at the setting for the Pera Palace’s famous English Afternoon Tea. Served from 3 to 6 p.m. daily, the Pera Palace’s afternoon tea service ramps up this British tradition to regal heights. Featuring live music played on a grand piano and an endless array of sandwiches, scones, sweets, and cakes, you’ll likely need a nap afterward or a walk around the narrow, winding streets in the vibrant Beyoglu District, where the hotel is located.

“The Orient Bar has always been a popular meeting point for residents, intellectuals of Istanbul, and international travelers alike,” Şaşmaz said. “Ernest Hemingway spent many an hour here, nursing a Whiskey. Today guests can enjoy a selection of fine wines, spirits, and cocktails in a refined ambiance.”

“Also, the extensive Orient Terrace where there is a separate menu made up of more casual tastes and a rich cocktail, lemonade, and iced tea menu is available for guests who prefer to enjoy open air and the beautiful evenings of the city in summer,” Şaşmaz said. “This past summer, the Orient Bar introduced a new menu called Historical Cocktails referring to the favorite drinks of iconic guests of the hotel like Hemingway.”

“Our favorite cocktail is ‘Respect to Hemingway,’” Şaşmaz said, which features pomegranate juice and Bourbon.

Other popular Historical Cocktails in the Orient Bar, Şaşmaz said, are “The Last Shot at The Orient Express” and “Mystery of Agatha.”

“Hemingway was often found Whiskey in hand, lost in the depth of his thoughts at the Orient Bar of the hotel,” Şaşmaz said. “Greta Garbo, too, was a regular—she always cherished the days she spent in Istanbul, daydreaming while watching Istanbul city life from her window.”

Staying at the Pera Palace, it’s easy to understand why. Minutes after you enter this hotel, you’ll likely find yourself daydreaming and amazed by its grand surroundings, just like many travelers from around the world and from different generations, past and present. 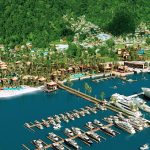