In 2015, one of the most exciting cocktail bars in Washington D.C. was transported to a new location in Blagden Alley. As far as location goes, it didn’t have to travel very far. However, in terms of scale, it entered a different dimension. The Columbia Room went from a small, cozy, upscale cocktail bar into a complete night-time venue, offering guests an experience like no other, regardless of the time of year.

The Columbia Room Then

The old Columbia Room occupied a plot of land that was slated for development. As a result, owners Derek Brown and his brother Tom were on borrowed time towards the end. This small venue was capable of serving just a couple dozen customers at a time, with just 10 seats in total, and barely enough room to showcase their vast collection of expensive liquor. However, despite space and despite the limited timeframe, this bar proved to be hugely popular during its few years of operation. In fact, it won several awards for its drinks and its service, and it proved to be a hit with the locals.

By the time it celebrated its fifth anniversary, the light was all but out for the first incarnation of the Columbia Room. However, just a few blocks away, a bigger, brighter light was waiting to burst into life.

The new Columbia Room is considerably bigger than it was before. In fact, it operates close to 2,500 square feet and is capable of serving herds of customers each day. Furthermore, it’s located in Shaw, one of the busiest neighborhoods, northeast of the White House, which means that they don’t have any issues with bringing traffic through the door.

For Derek Brown, it was about more than a simple expansion. It was about growth, and about turning his passion into something that the world could benefit from. Moreover, it was about something that customers could get as excited about as he was. So, during the changeover, Brown altered and expanded upon his vision for the Columbia Room. The new venue is split into several different “spaces,” offering different experiences for the discerned drinker. These spaces include:

The Main Space: This is where most of the action takes place in the Columbia Room. The decor is more like a traditional bar than other spaces in the venue. Guests can pull up a barstool and enjoy great drinks and exquisite decor. This space showcases all that is important to the venue, from the plants that give them the ingredients for their award-winning drinks to the people who invented those drinks in the first place.

The Punch Garden: A rooftop deck that has room for 30 guests, the Punch Garden is a spring and summer getaway. Guests are shaded by a canopy as they enjoy a selection of handmade cocktails, surrounded by greenery and all of the colors of spring. This is a stark contrast to the dimly-lit, cozy ambiance of the rest of the building.

The Spirits Library: One of the more popular sections of the Columbia Room is the Spirits Library, which is essentially a bookcase of booze surrounding a bar. Throughout this room, you will find decor that complements the complex cocktails and aged spirits on offer, along with carefully chosen music which helps to add to the overall experience.

As with the rest of the venue, cocktails take center stage in this room. You can sample some of the finest cocktails in the state for change on $15, including a Getaway, which combines a unique “salt tincture” with rum, Cynar, sugar, and lemon. There are also five different versions of the Old Fashioned, each of which uses a different base spirit, delivering a unique flavor in each drink.

It’s Not All About Cocktails, However

These sweet, elaborate drinks are certainly what the Columbia Room’s Spirits Library focuses on, and they take great pride in the variety and the quality on offer. However, there are just as many straight-up spirits, including rare, aged whiskeys, rums, vodkas, and Cognacs. You will find all of the following bottles behind the bar in the Columbia Room Spirit Library:

1811 Napoleon Cognac: Ever wondered what 200-year-old Cognac tastes like? You can find out here as one of the many aged bottles in the Spirit Library includes an 1811 Napoleon Cognac. This rare drink has been valued at more than $15,000 a bottle, so don’t expect your snifter to come cheap.

Vodka: Cognac, whiskey, and rum often dominate the shelves in liquor stores and collections. However, in the Spirit Library, you’ll find just as many vodkas and gins, including a Russian vodka from 1870. Produced less than two decades after the Crimean war, this is a piece of history, and one that comes served with “caviar service.”

Rye: America is the home of rye whiskey, a unique drink that was born on this continent and continues to flourish here. You will find a selection of new and old rye whiskeys in the Columbia Room Spirit Library, some of the rarest of which include Maryland rye whiskey produced as far back as 1860. For patriotic Americans seeking to savor a taste of their own history, this is the perfect chance.

Of course, many customers do not often get the chance to purchase such rare spirits, even in small doses. However, these spirits tend to be a little more accessible in the Columbia Room, as that’s the way the owners want it to be. In the words of Derek Brown, who founded this venue as a project of passion as much as a project of profit, “We want people to have that piece of history.” 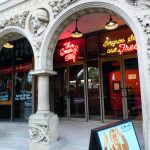 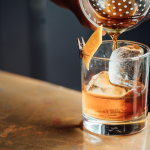